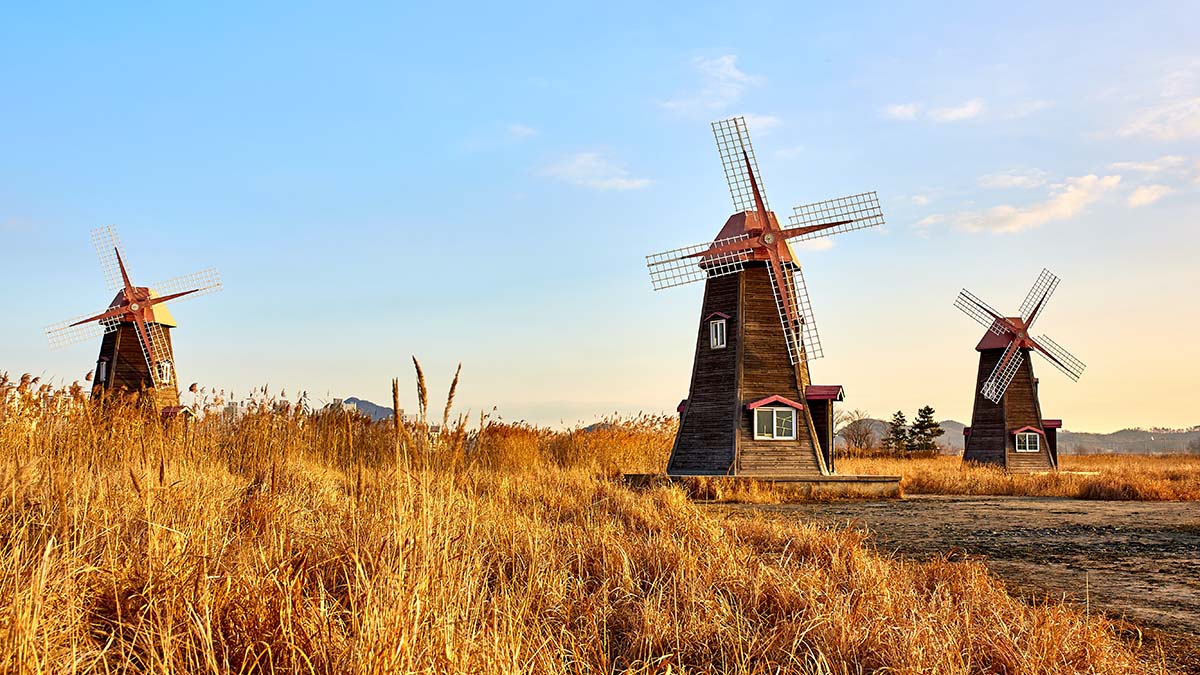 We’re seeing more and more wind-driven generators on the sky-line. This would seem to be an ecologically sound way of producing electricity, but, oddly, I frequently hear them being decried as an eyesore.

I wonder, however, if our descendants will be as keen to preserve them as we are to preserve those old windmills, which used to dominate the countryside from the hill-tops? 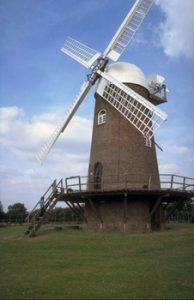 Windmills first appeared in Persia in about the 7th Century AD, but were unknown in Britain until the end of the 12th Century, when the idea was brought to northern Europe by the Crusaders. They spread rapidly, for windmills and water mills were the first machines used by man which didn’t depend on his own strength, or that of his animals.

When I lived in East Anglia, windmills were everywhere. Most were disused or in ruins, but some had been preserved. I knew one family who lived in a converted windmill; although many people did conversions of this kind, the miller seldom lived in the mill itself, but in a nearby cottage.

The reason windmills were so prolific in this area was that the countryside is very flat, and there are no swiftly-flowing rivers suitable for driving a water-mill, which was preferred, as it used a more reliable source of power.

But, there is a working windmill near where I live now, at Wilton, in Wiltshire. (Not the Wilton where they make the carpets; there are two Wiltons in Wiltshire) This was one of the last windmills to be built, and incorporates most of the innovations introduced over the years.

Like many surviving windmills, this is a brick-built mill called a cap or a tower mill, in which only the cap of the windmill rotates to turn the sails into wind. The other type, the post mill, needed the entire structure to be rotated by hand. 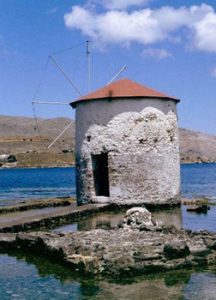 Earlier tower mills required the cap to be turned by hand, using a tail-post; I’ve seen many windmills in Europe which still do this. But, in 1745, the fantail was patented in England. This is the secondary rotary vane which automatically rotates the cap.

I came upon an even earlier form of windmill while on holiday in the Greek islands. These ere fixed structures, and are two of main types. The horse-shoe has a D-shaped plan, with the sail always on the rounded side. Round mills are a later innovation. They were often built in groups, and the miller selected the one whose sails were set closest to the wind!

This isn’t a very satisfactory arrangement, and, in other places, ways were devised to ensure that the sails always faced into wind.

Of course, the place to really see windmills is the Netherlands. But, as our guide once pointed out, if you see a working windmill of the traditional pattern in the Netherlands today, it’s more likely to be a wind-pump. Another interesting piece of trivia she gave us was that, if a mill was picked out in green, the miller’s family were Roman Catholics; if red, they were Protestants, while both colours signified a mixed marriage.

Major Peter Swayne, the custodian of Wilton Windmill, gave me some interesting facts, too. Until 1772, he said, all windmills had ‘common sails’. This is simply a framework to which canvas is attached. Like the sail of a boat, this can be reefed or furled, depending upon the wind velocity … probably why, like a ship, a windmill was frequently referred to as ‘she’.

Andrew Meikle invented sails where canvas was replaced by wooden shutters, which opened automatically if the wind reached a certain speed. This ensured the machinery turned at a constant rate. From this, William Cubbitt developed the patent sail, in 1807 which allowed adjustments to be made without the need to stop the mill. 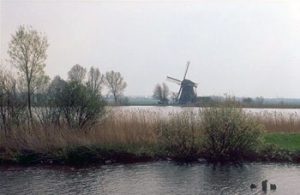 Wilton has four sails; two patent sails and two common sails. These turn at about 15 rpm., transmitting power through a right angle to the main shaft, turning at double that rate. The speed is doubled again at the one-ton millstones.

Major Swayne was not only a fruitful source of technical information. He had studied the way of life of those times, too. The miller’s life was often lonely, he said. The mill was usually in an exposed position, maybe some distance from the nearest settlement, located in a more sheltered site. Only in flatter areas could a windmill be near the village without too much penalty.

Then, there was the attitude of the farmers to the miller. A bushel of corn doesn’t yield a bushel of flour, and the most honest miller would be hard put to prove he hadn’t taken more than his due. So, many folk might remark darkly that the miller’s pigs are always fattest!

Whenever the wind was suitable; whenever corn was available to be ground, day or night, the miller worked, and rested on the unpaid days when the wind didn’t blow. He might be able to take an occasional cat-nap as he sat on the spout floor, testing the quality of the flour which came out by ‘rule of thumb’ … that is, by rubbing it between his thumb and forefinger. He had an ingenious device called a warbler, which rang a bell when he needed to go up to the bin floor, to replenish the grain-bins, lest he ‘grind to a halt’. 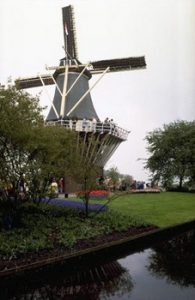 Although windmills can have as few as two, or as many as eight sails, the most popular arrangement was a four-sail mill. When it stopped, the sails usually formed a St. Andrew’s cross, which minimised the stresses on them. But, they could be stopped to make a St.George’s cross. This was normally a sign of mourning, but some devout millers used to turn the sails to this position for a few minutes before starting work.

To stop the sails midway between the two positions meant the miller required assistance; maybe he urgently needed the services of a stone-dresser to clean his millstones. The prominent position of the mill would summon him far more quickly than riding around the countryside to find him.

I recalled hearing about how the Dutch Resistance used a similar code in World War Two, to signal the presence or activities of German patrols.

Few windmills were built in Britain after the mid-19th Century. The repeal of the Corn Laws in 1846 enabled cheaper wheat to be imported. This could be milled by steam power at the docks. Any milling for local requirements would normally be done by the less weather-reliant water-mills.

Although working windmills are now rare, wind-pumps are still in use in many parts of the world, especially in remote places where water needs to be pumped up from a bore-hole.

Photo credits:
Windmills in South Korea by: Mathew Schwartz on Unsplash
All other photos are by Keith Kellett.