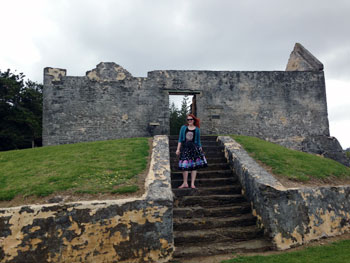 I didn’t fancy dressing up as a convict for the evening and neither did my daughter. We glanced through the brochure of tours on offer in Norfolk Island and decided to do our own thing. With cheap rental cars and few cars on the roads it was easy to tootle around by ourselves, stopping when we felt like it and looking out for cows that have the right of way. 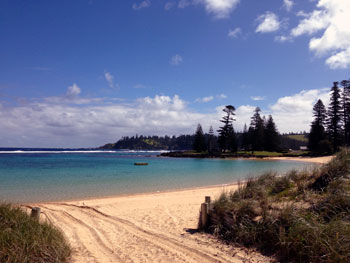 Norfolk Island, a self-governing territory of Australia is small, only 8 kms by 5kms. Two hours from Auckland and two and a half hours from Sydney by air it was a popular holiday destination in the 1970s and 1980s for Australians and New Zealanders keen to have a relaxing holiday and do some duty free shopping. The shops are still there, now rather jaded, but what drew me to Norfolk was its history, in particular its history as a penal colony and as a second home for the Pitcairn Islanders.

Captain Cook ‘discovered’ Norfolk on his 1774 voyage and claimed it for Britain, but didn’t land there. In March 1788 15 convicts and seven free men arrived from Sydney to set up a penal colony, Britain’s second after New South Wales, on the uninhabited island. The colony remained until 1814 when the British left, burning the township before doing so. 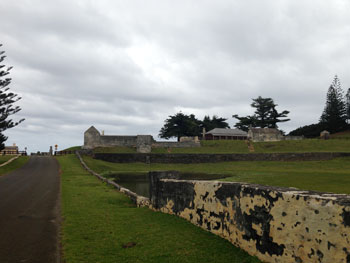 The second penal settlement on Norfolk Island was built in 1825 on the same location as the first. It lasted until 1856. During this period Norfolk was used as a punishment destination for the most hardened criminals and conditions were harsh. The UNESCO World Heritage site of Kingston has many remains of the stone buildings of the second settlement. These are extensive and you can wander around at will; there is no admission charge.

Laura and I were the only people there the day we visited which made it easy to travel back in time and imagine life during those 30 years. We battled the wind at Sydney Bay while hearing the creak of the convict ship as it fought to keep off the rocks and discharge its cargo. We felt the relief of the shackled convicts, wretched after their horrendous journey, as they finally disembarked. We could see them flinching at the lashes they received for the most petty of misdemeanours and the relentless work they were forced to do to wrest a living from this island. Any illness spread rapidly and as we wandered the remains of the hospital its stone walls seemed to echo the groans of the sick and the resignation of the dying. 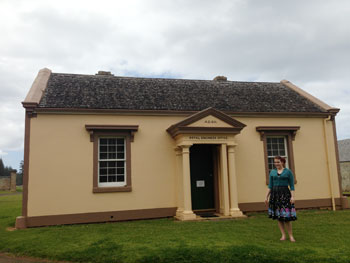 Walking up Quality Row, where the free men and their families lived, we saw the women working at their needlepoint and tending their gardens while close by convicts toiled, chained, often hungry and ill-treated. One of the houses in Quality Row has been restored and decorated to reflect what it would have looked like during the second penal settlement. A pretty little house set in a cottage garden it is light and airy, no doubt quite a contrast to the conditions in which the convicts were housed. It is one of a number of museums that give an interesting insight into not only Norfolk Island’s convict past but other aspects of its history. 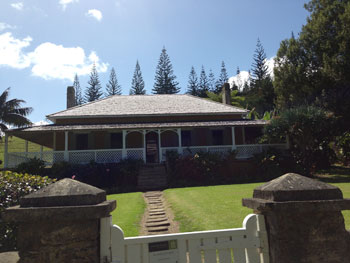 In 1856 the British troops, convicts and free men were taken off the island and Norfolk Island was given by Queen Victoria to the Pitcairn Islanders who had outgrown their tiny island rock. Some of the Pitcairners later returned to Pitcairn but most remained and many of their descendants live on Norfolk Island today. The Pitcairn Islanders took over the buildings that had housed the convicts and their captors. Not all are ruins. Government house, the military barracks, several homes and other buildings still survive intact. 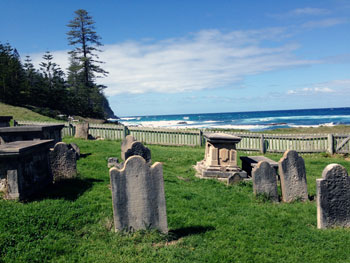 A fascinating slice of island history can be seen in the graveyard, framed by large Norfolk pines and overlooking the sea. The days we had on Norfolk were gloriously mild and sunny but many of the headstones bore testament to harsher weather. In the graveyard there is no distinction between free and captive. All are buried here, convicts, gaolers, military, men, women, children, Pitcairn Islanders, and their descendants. The cemetery is still used today and for those fascinated by the Pitcairn story like me it’s fascinating to trace the generations of Pitcairn names like Fletcher, Quintall, Nobb and Buffet.

If you’re interested in British, Australian or Pacific Island history then Norfolk Island is a fascinating destination. We had three days there, which was plenty to see everything we wanted to, although you could easily spend longer if you wanted a relaxing holiday. 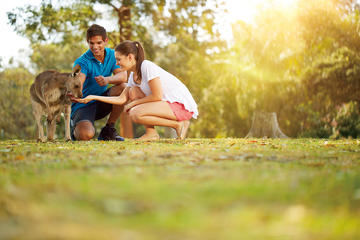 ♦ Getting There: Air New Zealand is the only airline that flies to Norfolk Island. There is one flight weekly to and from Auckland and two each from Sydney and Brisbane.
♦ Accommodation: There is a wide range of accommodation.
♦Getting Around: There is no public transport on the island but rental cars are cheap and easy to hire once you get there. Most accommodation providers offer a free pick up service from the airport. There is an extensive range of tours available.
♦ Eating: There is a range of cafes and restaurants in Lone Pine and scattered around the island.
♦ Discover Norfolk Island: