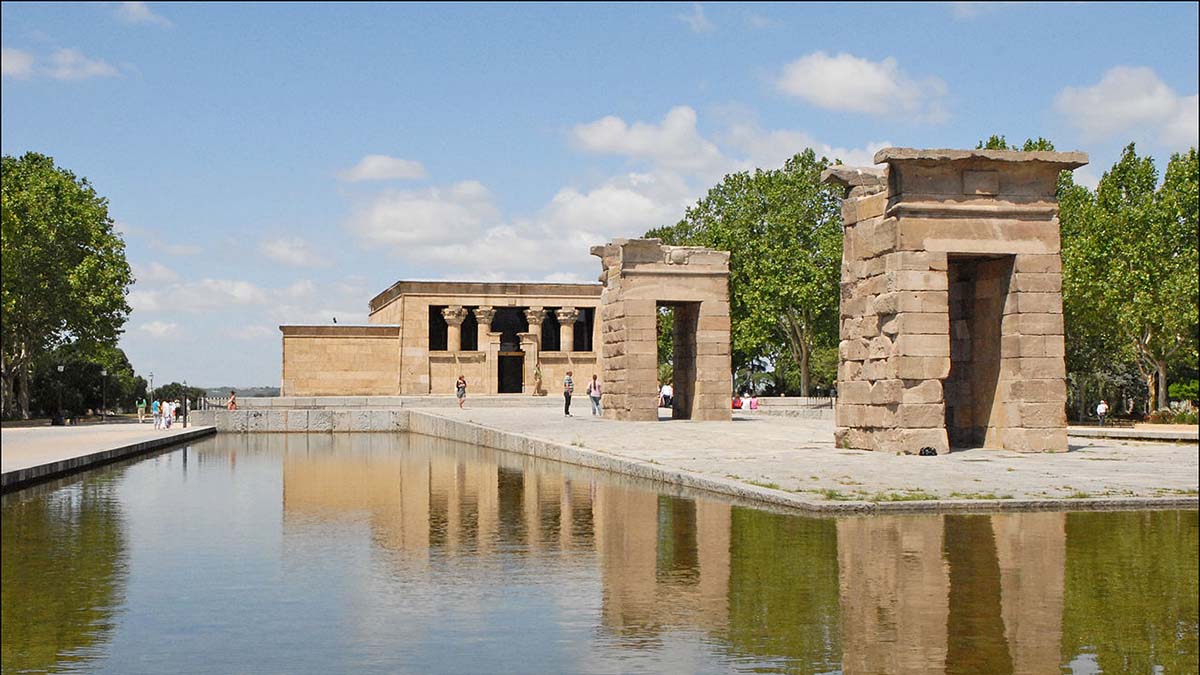 It’s a bit of a shock to see an ‘Egyptian-looking building’ on top of a hill, while on an open-top bus tour of Madrid. It is, I later discovered, Egyptian indeed. Even if you aren’t into ‘things Egyptian’, you can’t help but wonder how an Egyptian temple came to be situated almost in the centre of Spain.

The Debod Temple was built … or rather, re-assembled … near the Royal Palace, in the Parque de la Montana; the site of a former Army barracks, on top of a hill called Principe Pio Hill. Surrounding the building is a clear, moat-like lake and the whole thing stands inside a considerable garden, with palm trees making the temple seem at home, even against the backdrop of Madrid’s skyscrapers.

There was a video, projected on to one of the ancient walls, but the commentary was in Spanish only, of which my command doesn’t extend to Egyptological matters. And, there were wall carvings. These, also, I was disappointed in, but then, I’ve been to Egypt, where there’s much better to be seen. And, as I found out later, for 60 years, the temple had been under water for three-quarters of the year.

Upstairs, models show how the temple probably looked in its heyday, and how that stretch of the Nile looked before the coming of the dams. Better still, a series of computers gave a commentary … in English, if desired … describing the history of the temple, how the temples were rescued from the rising waters and, most importantly, how the Temple of Debod came to be in Spain.

Many Egyptian artefacts came to Europe in the 19th and early 20th Centuries … often, without the courtesy of asking the Egyptians. But, this wasn’t the case with the Temple of Debod. As late as 1960, it stood on its original site, and was freely given to Spain by the Egyptian authorities. 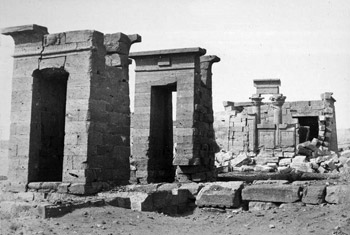 Originally, the Temple of Debod stood on the right bank of the River Nile, just above the First Cataract near Aswan, dedicated to the god Amun and the goddess Isis. In 1898, the British, who then controlled Egypt, decided to dam the Nile at Aswan, the work being completed in 1902. With typical short-sightedness, they completely disregarded the fact that some important monuments would be lost beneath the surface of the resulting lake … including the beautiful Temple of Isis on Philae Island, and the not-so-well regarded Temple of Debod nearby.

However, once a year, during the annual flood, the sluice gates of the Aswan Dam would be opened, and it was possible, for a few short weeks, to visit the temples. Nevertheless, being submerged beneath the lake for most of the time wasn’t very good for the temples, especially Debod, which was already in a ruinous state when it was discovered.

In the late 1950s, a new dam was proposed. This would be the massive, Russian-built High Dam, and it was quickly realised that its building would cause many more monuments, including the colossal rock temple of Abu Simbel, 270 kilometres to the South of the dam, to be lost below the surface of the new Lake Nasser. 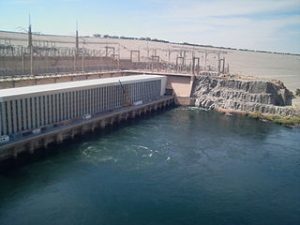 The Director-General of UNESCO appealed for any help that might be forthcoming, and over 50 nations responded. The selected monuments were dismantled, and re-assembled piece by piece above the rising waters.

Some temples were less fortunate in having new sites found for them. But, the Egyptians decided they would be dismantled anyway, and presented to the countries which helped them most.

The visit filled a gap for me. When I visited Egypt, all the guide-book would say was ‘Several other temples were rescued, and given, as a token of appreciation, to the countries which had helped with the project’.

The commentary in the temple filled some of the missing spaces. It told about temples being re-assembled in the USA, the Netherlands, Italy and Germany. But, of course, the one we are interested in went to Spain.

A few years before, we’d taken a cruise on Lake Nasser, terminating at Abu Simbel, calling at several other rescued sites on the way. Many visitors disregarded Abu Simbel until the cruise boats were established, for it could only be reached by either an expensive flight or a long, tedious coach journey.

The problem was solved in exactly the same way as the old Egyptian navigators dealt with the cataracts.. More boats were built above the obstacle!

Cruises to Abu Simbel became possible. There won’t, however, be the congestion sometimes encountered on the Nile to the north of the dams, which sometimes resembles the Mississippi in its heyday! The number of boats on Lake Nasser will be strictly limited; understandably, the Egyptians don’t want too many tourists floating around on their drinking water! 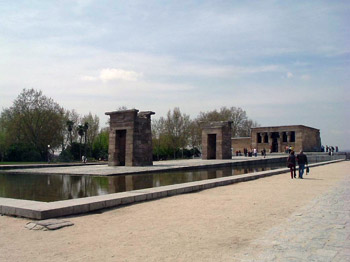 Immediately on boarding the boat above the Aswan Dam, the popular concept of modern Egypt was left behind. There’s only the boat, the lake and the temples … and tranquil, unhurried peace. On the way to Abu Simbel, the boat calls at the Kalabsha Temple site, Wadi el Seboua and the Amada Temples, all of which were rebuilt above the waters of the lake.

They’re still rarely mentioned in guidebooks, although, for example, the Avenue of Sphinxes at Wadi el Seboua is as fine as anything below the dams. It looks even more majestic, surrounded only by the desert sands, without the litter, fumes and bustle of a modern Egyptian town.

At the ancient citadel of Kasr Ibrim, the guides usually arrange a ‘sound and light’ show. This site is still in its original location, and it’s an important one. Not only Ancient Egyptian, but much later history, almost up to the present day, awaits discovery. So passengers aren’t allowed ashore, because archaeological work is still going on, but watch from the comfort of the sun deck.

The old priests and builders were accomplished showmen, and could extract the maximum awe and reverence from the worshipping masses. The temples were designed for approach from the front. That’s now impossible at Abu Simbel, except by boat, which is now easily the most satisfactory way to come.

For thousands of years, the temple was buried under the sands of the desert, until, one day in 1813, a sandstorm revealed a portion of it to Swiss explorer and archaeologist Jean-Louis Burckhardt. Four years later, an Italian named Belzoni managed to dig out enough of the façade to enter the temple.

The temples here wasn’t built, though; it was carved from solid rock! But, the engineers responsible for its rescue were up to the task. First, they injected 33 tons of resin into the rock to consolidate it, then the temple was sawn into 1036 blocks, weighing, on average, 30 tons each. A further 1112 blocks were taken from the surrounding rock. These were re-assembled almost seamlessly around concrete domes. Any cracks were soon filled by dust and sand, causing them to disappear. And, they managed to arrange things on the new site so that the sun lit up the interior of the temple twice a year at the Solstices, just as it had at the old site, ninety feet below.

When we arrived, most of the air and coach-borne visitors had gone. So, we had the place almost to ourselves for our visit, which included another ‘sound & light’ show. Then, the boat sailed once more, and dinner was served on deck, with the illuminated temple as a dramatic and unforgettable backdrop.

But, it didn’t do to make too late a night of it. There was a call 5.30 a.m. to see the sunrise on the temple! The sun played a major part in the rituals, so the temple is sited on the west bank of the lake, and at first light, it’s seen at its best.

Maybe the newly risen sun, setting the massive statues aflame, rivals even the ‘sound and light’ show of the previous night? 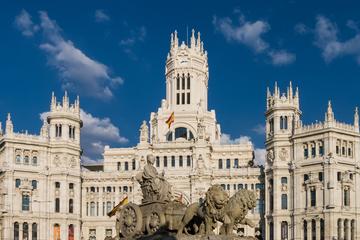 ♦ Madrid Tourist Info: Debod Temple
♦ Madrid Official Tourism website
♦ Madrid Airport receives flights from all over the world; alternatives are to arrive by train (www.renfe.com) or by bus (www.eurolines.com)
♦ The Metro is the easiest way to get around Madrid, and the nearest station to the Debod Temple is Ventura Rodriguez. Or, the ‘Madrid Vision’ open-top bus tour stops right by the Temple. 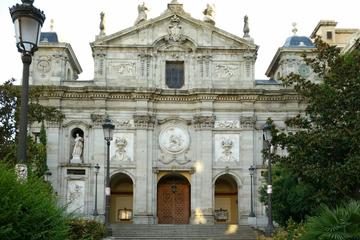 About the author:
Having written as a hobby for many years while serving in the Royal Air Force, Keith Kellett saw no reason to discontinue his hobby when he retired. With time on his hands, he produced more work, and found, to his surprise, it ‘grew and grew’ and was good enough to finance his other hobbies; travelling, photography and computers. He is trying hard to prevent it from becoming a full-time job! He has published in many UK and overseas print magazines, and on the Web. He is presently trying to get his head around blogging, podcasting and video. Email: keith-kellett@tinyworld.co.uk.