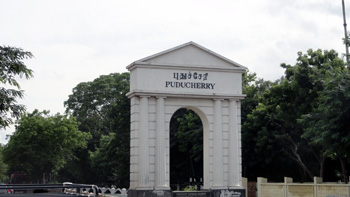 Formerly known as Pondicherry, Puducherry is a union territory located close to the city of Chennai in the South India. Fondly referred as “Pondy”, this beach city lies at a distance of about 170 km from Chennai and is located on the south eastern coast of India. Puducherry was ruled by the Dutch, Portuguese, British and French colonialists in the 16th and 17th century. A French colony until 1954, the French influence is hard to miss and has an ‘almost all pervading effect’ in most part of the old town as it is known today. This part of the town is based on the French grid pattern and has well planned perpendicular streets. It is common to see the streets retain their French names and houses in the French architectural style. It is a great place where both India and French coexist seamlessly giving the place a distinct feel.

Also dubbed as the “Europe of India”, the city is a tourist hub and attracts a large number of both Indian and foreign travelers. Moreover, given its proximity to cities like Chennai and Bengaluru, Pondy (as it is fondly known) is an ideal weekend getaway. With lots of places to visit and activities to do, the city has something to offer for every kind of tourist be it adventure, history or relaxation. 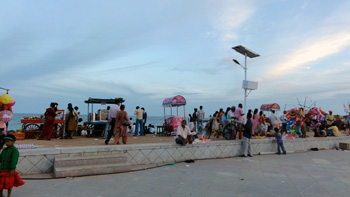 As it is a beach city, the Promenade is a hot spot for locals and tourists alike. About 1.5 km long this runs along Goubert Avenue (Beach road) and overlooks the Bay of Bengal. There are huge rocky boulders that prevent one from getting into the water but there are benches to sit and a fairly broad pavement where you can enjoy your morning and evening walks. Walking along the promenade you can see the statues of Mahatma Gandhi and Jawaharlal Nehru. About four meters tall and surrounded by 8 granite pillars, the Gandhi statue is a prominent figure on the beach front and is of special significance on National days. The French War memorial which is dedicated to the martyrs who laid down their lives during World War I is also along the Promenade. The old lighthouse that is one of the famous landmarks of Pondicherry can also be viewed from here. The place is full of life during the evenings especially on holidays and weekends with scores of hawkers selling street food, souvenirs, trinkets, junk jewellery and the like. The cafes and restaurants along the promenade are also great places to sit back, relax and watch the beautiful sunset. 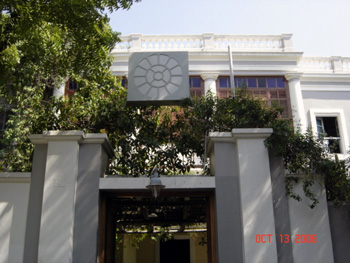 One of the key points of interest in Pondicherry is the Aurobindo Ashram which houses the tomb of Sri Aurobindo. He was a famous Indian nationalist, poet and yogi who joined the Indian movement for independence against the British rule. During his stay in Pondicherry he discovered a technique of spiritual practice called Integral Yoga and with the help of his spiritual collaborator, Mirra Alfassa (“The Mother”), he founded the Sri Aurobindo Ashram. The Ashram and its surroundings are serene and peaceful with a detail for cleanliness. The stone ‘sammadhi’ of Sri Aurobindo and The Mother are located in the central courtyard of the building which itself is set in a beautifully maintained colorful garden. There are several shops, guesthouses around the city that are run by the Ashram. You need to leave your footwear outside and children under the age of 3 are not allowed inside the premises.

The vicinity around the ashram is tranquil and calm and it is a common sight to see people from various nationalities come together here. Traveling in bicycles on the cobbled streets, the polite and affable nature of the people is heartwarming. The “European” feel to the buildings, roads and signs is prominent. 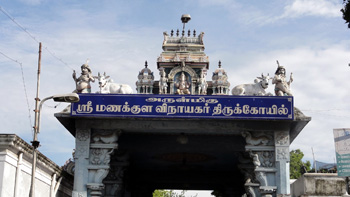 Located in the vicinity of the Ashram is the popular “Manakula Vinayagar Temple” which is a temple dedicated to the elephant God; Lord Ganesha. With beautiful carvings and an elaborate “gopuram” which is the exterior tower of a temple, this place also houses an elephant that is stationed outside the temple. Right in the middle of the old French town, this temple attracts scores of tourists and locals as the deity is considered very powerful. The market outside the temple is equally colorful with flowers, idols and articles of worship on display.

The Pondicherry museum and the botanical gardens are worth a visit if you are a first time visitor. The museum has a wide collection of a number of sculptures belonging to the Pallava and Chola dynasties and also archaeological findings from Arikamedu, an erstwhile Roman settlement located about 7 km from Pondicherry. The botanical garden boasts of a large variety of plants and includes the Japanese garden and a “toy train” as its main attractions. 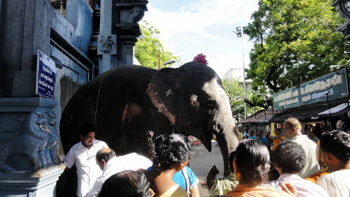 A little away from the city at about 7 km, Chunnambar or Paradise beach is yet another haven for tourists. Accessible by ferry, this is located at point where the Chunnambar River backwaters meet the Bay of Bengal. The view of the pristine waters, sand and sun make this a great addition to the itinerary. 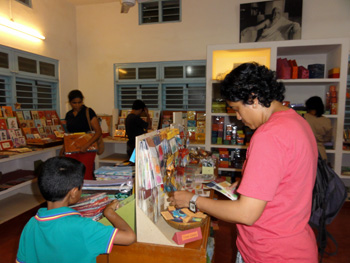 Auroville or the “city of dawn” is located about 8 km north west of Pondicherry and was founded by the Mother. Conceived as a universal town where men and women of various countries can live together in peace and harmony, this place has over 2000 people living and are involved in activities like agriculture, handicrafts, healthcare, administration etc. The central Matrimandir, which is not a temple but a place for individual silent meditation is stunning and set in an area of 62 acres in the centre of the township. The Auroville visitor center is a unique place to visit and one can spend at least half a day at the boutique stores and cafeteria within.

Pondicherry is a haven for shopping if you are interested in handicrafts and articles made from handmade paper. The paper factory and multiple stores near the ashram retail indigenously crafted stationery, pen holders, boxes and other souvenirs in a plethora of colors and patterns. You can also pick up paper that is available in different grades and hues. Candles, incense sticks and essential oils are also great buys. Apart from the Ashram area, Jawaharlal Nehru (JN) Road and Mission street are great places to shop and have some exclusive boutique stores. The Sunday market on J N street is worth a visit.

♦ The city of Puducherry lies on the Coromandel Coast of Bay of Bengal on the south east coast of India.
♦ The closest airport is Chennai about 150 km away, which is well connected to all major cities across the globe.
♦ Pondicherry is also well connected by bus and train from major towns and cities in India.
♦ The nearest rail station from Pondicherry is Villupuram, which is about 35 kilometres away from the city. 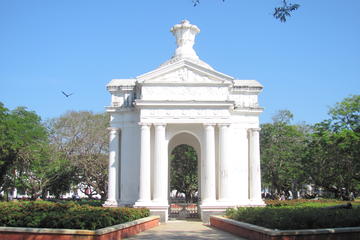 About the author:
Rashmi Gopal Rao is a freelance content writer and journalist. She is from Bengaluru, India and writes for a few travel websites. Her hobbies include travelling, reading, writing and photography. She is also passionate about home decor and gardening. You can follow her on her blog rashminotes.wordpress.com.