As I walked barefoot on the pebble beach it gave me the feeling of having a foot massage. The intensified sensation always stays in my memory of how the beach of Étretat felt like it was on fire under the summer heat.

I had always dreamed of seeing the scenes Claude Monet portrayed on the canvases with my own eyes. The natural beauty itself is one reason. But the yearning to see through the master’s secrets of colors, brush strokes and representation was even stronger. Normandy was one of the ideal areas to pursue my impressionistic dream.

Besides building his final home in Giverny, Monet painted in a number of locations in Normandy. The Alabaster Coast around Étretat was often featured in Monet’s masterpieces the favorite seaside resort for Parisians that has spread its fame outside the French border. 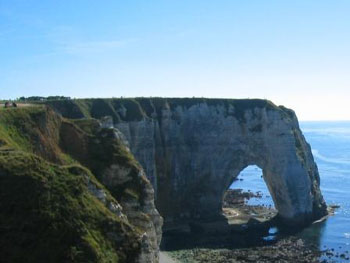 The chalky north coast of Normandy captures the heart of every visitor at first sight. Years of seawater erosion and weathering have sculpted the coastline on both the west and east sides of the beach, leaving behind towering white cliffs and protruding headlands pierced by arches of various sizes. No wonder Monet visited Étretat every year between 1883 and 1886 and produced more than 60 paintings.

“I’ve decided to go to the seaside. I’ll go to Étretat to do a few beautiful marines for you.” Monet told his dealer Durand-Ruel in September 1885. He brought home La falaise d’Amont. Porte d’Amont on the east side of the beach was different from the one in Monet’s painting. The Chapel of Notre Dame de la Garde, which was built in 1854 on top of the cliff above Porte d’Amont and reconstructed in 1950 due to World War II destruction, is missing on Monet’s canvas and so are the buildings of Étretat behind the beach.

Monet’s view of the coastal scene only became more apparent as my friend and I approached the cliff. Following Monet’s particular perspective of Porte d’Amont, we moved away from the hustle and bustle of the vacationer’s site so we could experience a different Étretat, one which was closer to the untouched Nature.

Monet featured most often in his paintings the arch Porte d’Aval and the pillar Pointe d’Aiguille on the west cliff of Falaise D’Aval. The French writer Guy de Maupassant, whom Monet frequently met up with in 1885, likened Porte d’Aval to an elephant dipping its trunk into the sea. The arch and the 51-meter-high pillar seem to be linked viewed from the beach. Monet painted the scene many times at different hours of the day. The Cliff, Etretat, Sunset of 1883 is my favorite. Monet created a symphony of colors in the sea—a stroke of red next to a bright green; a dash of orange on top of a slash of blue; a light yellow nestled next to gray-violet. As I contemplated the rhythmic and yet subtle movements of the water, I could not help but smile. Did Monet not reproduce them on the canvas as well?

Only until I stayed closer to the cliff could I uncover the true picture of the well-known seascape. The tide did not favor our venture down the cliff to the foot of Porte d’Aval. Missing the opportunity to see the pillar right through the archway as Monet captured it in L’Aiguille, à travers la Porte d’Aval, I could only share Alice Hoschedé’s envy at Monet’s excitement. 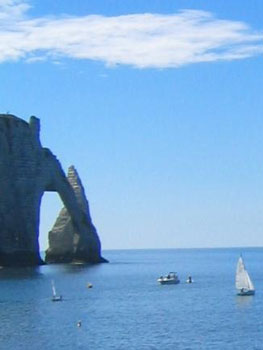 “You are right to envy me. You cannot have any idea how beautiful the sea has been for two days, but what talent it will take to render it, it’s crazy. As for the cliffs, they are like nowhere else. Yesterday, I climbed down to a spot where I had never ventured to go before and saw wonderful things there so I very quickly went back to get my canvases. In the end, I am very happy.”

“Monet must have walked towards the arch and painted the scene real fast,” My friend pointed at a warning sign near the cliff. “Low tide only lasts for a few hours. Given the pretty rough sea here, the warning sign doesn’t surprise me when it says high tide returns quickly to the shore.”

We found some consolation in the hike up the cliff of Falaise d’Aval. The sapphire wavy sea and the white pebble beach stretch all the way to Falaise d’Amont in front of the town of Étretat. On the other side of Falaise d’Aval, I was presented with a full view of the arch of Manneporte, the largest of Étretat’s three stone portals. Against the backdrop of a clear blue sky, the white chalky layers of the cliffs glowed under the sun. 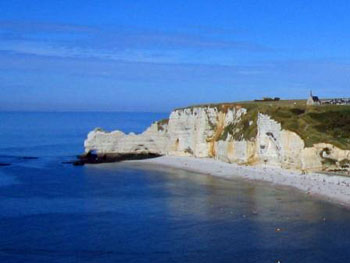 Following the trail all the way to the top of Manneporte, I could see, on the east side, Porte d’Aval and Pointe d’Aiguille again next to each other as in L’Aiguille et la Porte d’Aval, Étretat. Monet painted the same motif from the beach below us as well. Bathed in the mellow evening light during low tide, the pillar and the arch in the painting hardly appear overwhelming although they still look gigantic compared with the tiny boats between them. While the view before me was imposing, the painting impressed me with its serenity.

The long white walls seemed never-ending when I looked towards the west. If time had allowed us to go on with our walk, we could have come to another huge promontory, Pointe de la Courtine. When we were retracing our steps on the cliff, Monet’s words in his first trip to Étretat echoed in my mind. “I can’t help but be seduced by these admirable cliffs.” 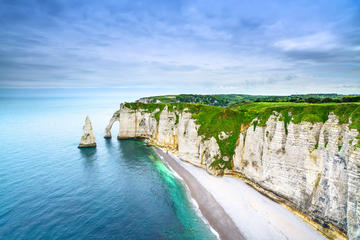 Étretat is a small town inaccessible by train. The most convenient way to reach Étretat is by car. The drive from Paris takes about two and a half hours. Alternatively, you may start from Rouen, the provincial capital of Normandy, for a shorter ride of about one hour twenty minutes.