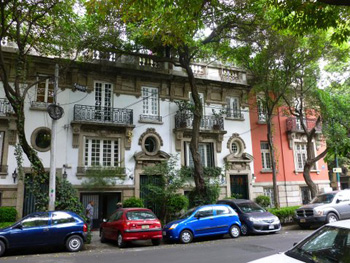 Very few people are indifferent to Mexico City. Love it or hate it, it truly is a megalopolis – the sprawling, carbon monoxide spewing juggernaut of Latin America, but also its cultural heart. And while its exterior might seem grimier than Eurocentric Buenos Aires or less fashionable than beach-ready Rio de Janeiro, the city contains a great soul buried just beneath the surface: one that reaches far back beyond the time of the Spanish conquistadors and continues on today, forever trying to balance modernity with the past, and the New World with the Old. Mexico City bears the torch of progress in a conservative country, and as such, has always attracted artists, activists, intellectuals and writers from all over Mexico, Latin America and the outside world, all looking to draw upon the cultural wealth of the mestizo nation and to find a place for themselves within it. 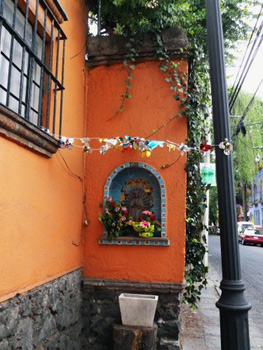 Over sixty years ago, two members of America’s Beat Generation did just that. First William Burroughs, then Jack Kerouac, came to Mexico City, searching for freedom, beauty and surreal inspiration in its storied, hallowed streets. They were drawn to a neighbourhood called “La Roma”, an enclave with a spirit that remains decidedly bohemian to this day, despite rising prices and gentrification spilling over from the neighbouring Colonia Condesa (“colonia” is the word that denizens of Mexico City, Chilangos, use for “neighbourhood”.)

Located just southwest of the city’s historic centre, La Roma is a locale of French-inspired architecture, built largely by the Francophile dictator Porfirio Diaz at the turn of the 20th century. To walk in the footsteps of Burroughs and Kerouac is to trod a path laden with shady public plazas, dusky mezcalerias, and galleries filled with young people basking in the promise of one of the biggest cities on earth. And while La Roma is not, by any means, the cheapest neighbourhood in Mexico City these days, it remains wonderfully affordable in comparison to more famous Beat haunts like North Beach or Greenwich Village, where artists were priced out years ago. 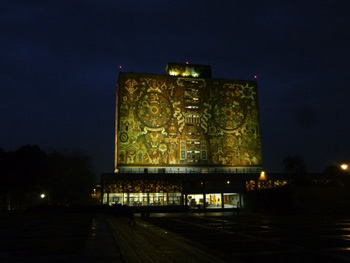 La Roma is still the kind of place where a drag queen can live off the proceeds of her costume designs. Believe me, I met her. She lives in a small apartment off of Avenida Insurgentes and a red light shines from her window day and night, like a beacon, signalling to those who are wild and crazy and wonderfully artistic that they still can, unlike their Gringo counterparts, afford to live in a beautiful, central and historic neighbourhood.

William Burroughs moved to Mexico City in 1949 because he was on the run from the law. But he stayed there for five years because it appealed to his sensibility, being, as it was, a melting pot of New World mysticism, cheap sex, liquor, and the drugs that fuelled him to write and live voraciously. While Mexico City has changed a great deal since then, there are still a few traces of Burroughs and his fellow Beats to be found. On Orizaba street in La Roma, a sign indicates his most famous address, Orizaba 210, where Kerouac visited him, and where they became known for late night drug-fuelled rambles through the neighbouring streets, and to Plaza Luis Cabrera nearby. 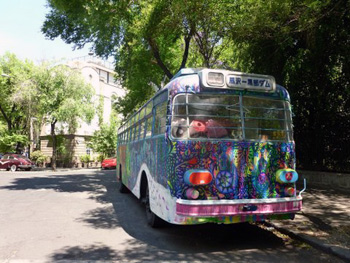 Today Calle Orizaba is one of the most beautiful in the neighbourhood, and the walk from 210 Orizaba north to the Insurgentes metro station is fantastic, taking you past historic homes, galleries, and the previously mentioned Plaza Luis Cabrera. It also passes the even lovelier Plaza Rio de Janeiro, where a replica of Michelangelo’s David towers above the square. Several intersecting streets are also worth exploring along the way, especially Colima and Durango, for their brightly coloured buildings, independent boutiques and art-filled watering holes. Casa Lamm, at the intersection of Orizaba and Alvaro Obregon is a cultural highlight, as is MUCA Roma on nearby Tonala street, a satellite gallery of the National Autonomous University of Mexico. Located in an old historic home, it contains several floors of modern art, as well as one of the few free public washrooms in the area. These institutions are a testament to the dichotomy between historic preservation and gentrification that is now occurring in La Roma. On one hand they have kept art thriving and alive in the neighbourhood, and on the other, they have made it easier for businesses like American Apparel (Mexico City’s only outlet) to move in. It’s a double-edged sword, and you can pick your side amongst the al fresco dining options that surround nearby Plaza Rio de Janeiro. Orígenes Orgánicos, a corner café, represents the new, serving healthy vegetarian organic options on a private patio, bucking the trends in a country known for its love of meat. The dishes are not cheap by Mexican standards, about 90-120 pesos each (8-10 dollars), though they can provide welcome relief to travellers weighed down by a lack of plant-based options. For a new take on an old favourite, try their Nopales Huichapan: grilled cactus served with organic cheese, tomato and avocado. If you’re feeling more traditionalist, however, you can load up on birria tacos, made from stewed goat meat, around the corner for 6 pesos each, and eat them in the more democratic shade of the Plaza. Both are delicious. 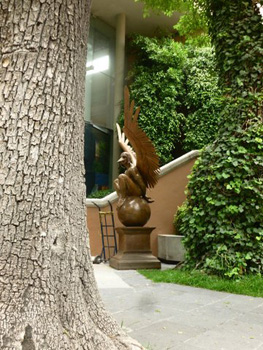 For a less trendy, more downhome perspective of La Roma, head to Roma Sur, which, for those of you who are Spanish-deficient, is the southern section of the neighbourhood. Centred around the Chilpancingo Metro station, Roma Sur is less pretty than its northern neighbour, but offers many cheaper, more authentically Latin American experiences. Right outside the Chilpancingo Metro station, on Avenida Baja California, La Espiga, a Mexican bakery, serves up delicious pastries for around five pesos, and fresh out of the oven Bolillos (buns) for even less. Walk a few blocks east and you hit Calle Medellin, home to Colombian restaurants and bakeries, and the Mercado de Medellin, a huge indoor market where you can do your produce shopping, buy fresh juice, or, if you feel like it, sit down to a delicious meal of chilaquiles con longaniza or enchiladas verdes for less than four dollars.

While you could spend several days in La Roma alone, there are numerous places nearby that are also worth exploring if you’re looking for a Burroughsesque fix of art and dissolution. La Clandestina, a five minute walk away, in Colonia Condesa, is one of the best watering holes in the city, serving up Mezcal to the young and creative Chilangos who flock here. Mezcal is Tequila’s smoky and rough-around-the-edges cousin, and Clandestina serves it as it should be, not in bottles, but draft, from large plastic jugs that look like they were produced in the owner’s backyard. More than sixty varieties are on tap, and glasses are served with chile-sprinkled fresh orange slices on the side, to cut the liquor’s bite.

If Condesa’s “fresa” scene (Chilango slang for the upper class trendsetters who frequent the neighbourhood) seems too trendy, head over to Plaza Garibaldi in the historic centre, where Mariachis play late into the night and public drinking is allowed. Jack Kerouac famously began a late night ramble here in the 1950s, and it’s still popular today, a place to bring your friends and a bottle of tequila, and to simply sit back and enjoy the live music. The Centro Historico can be easily reached from La Roma and Condesa by Mexico City’s efficient, clean, and shockingly cheap metro (only three pesos.) Keep in mind, however, that both the Metro and buses stop running around midnight, so unless you want to mimic Kerouac and take a very long walk home, get in a taxi. 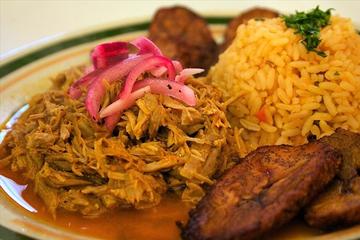 ♦ Mexico City is called the city of eternal spring for a reason! The weather is almost perfect, thanks to its high altitude. But beware, it can get cold at night, especially in winter. Central heating is not common, so bring layers.

♦ Don’t believe the hype! Public transit is safe, especially the Metro and the Metrobus. The trains can get very crowded, however, so if you’re a woman traveling alone, take advantage of the first three subway cars, which are designated women-only during rush hour.

♦ Walking alone at night is safe in the Condesa and Roma neighbourhoods, however it’s worthwhile to watch your bag if you head into the Historic Centre, which tends to be more deserted after hours.

♦ For information about Mexico City’s current writers-in-exile, check out Casa Refugio Citlaltépetl, in Colonia Condesa. Founded in 1988, it houses writers from all over the world who have had to leave their countries of birth. They host lectures, poetry readings and other literary events. 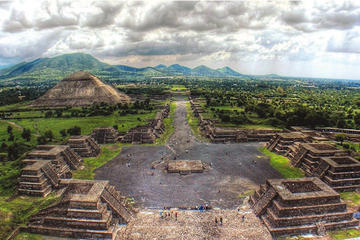 All photos are by Ellen Johnston:
Art in the couryard of Casa Lamm
En route to San Angel
The National Autonomous University of Mexico, now a designated UNESCO World Heritage Site.
A bus set up next to Plaza Luis Cabrera to host alternative theatre performances
The classic “Porfiriana” architecture of La Roma