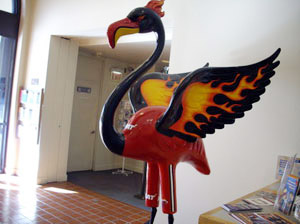 You can’t visit Miami without being reminded of the Seminoles, the Miccosukee and the Tequesta, South Florida’s native American ancestors. What better pastime for a rainy Friday afternoon than leaving the glamour of South Beach behind and diving into the exciting history of the Indians with a visit to the Historical Museum of Southern Florida, located at 101 West Flagler Street in downtown Miami.

On entering a museum, you do not necessarily expect to be greeted by the sound of excited children, squealing in delight. But that’s exactly what happens, when you visit on what the museum offers as a “Family afternoon”. The first thing that distinguishes the HMSF from rather awe inspiring places like the British Museum in London or the Prado in Madrid, is that this a what I call a ‘hands on’ venue which has a unique way of bringing history to life. Combining entertainment with education in a way which enthralls even smaller children is no mean feat! 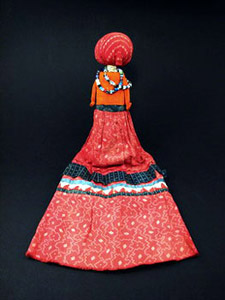 The fun already starts at the entrance where the visitor is greeted by a multi colored huge statue of Florida’s signature bird: the flamingo. The flamingo in question is not only colorful but also wears boots and glasses. The tone is set! Climbing the sweeping staircase to the main exhibition hall on the first floor, my eyes are met by a spectacular mural depicting the most important archaeological find in recent years in Miami: The Miami Circle.

As is so often the case, the Miami Circle came to light by chance. In 1998 a work crew started excavations to lay the foundation for a new hotel and apartment block on Biscayne Boulevard between Flagler Street and Brickell Avenue Bridge bordering the Miami River. Below grass covered mounds, they discovered a huge circle of rocks with deep round holes cut into it.

Building work was stopped and the Historical Museums’ archaeologists got involved in unearthing an ancient sacred site belonging to the prehistoric Tequesta Indians, whose presence on the banks of the Miami River were known to the Spanish conqueror Ponce de Leon in 1513. The big surprise and historical relevance of the sacred site was that the Tequesta population and culture was much older than originally thought. Named “First Arrivals” many artifacts recovered from the site are now exhibited in the museum and the big mural gives a first hand impression of the Tequesta’s life and ceremonies. 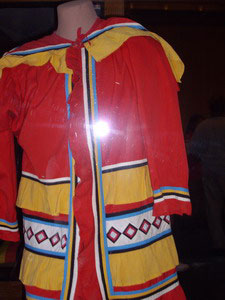 Excavations of the Circle continue and the Tequesta ancestry of Miami is being commemorated and honored by a park with the circle as its center piece and due to open to the public at the end of this year.

The Museum is not only dedicated to the Indian past of Miami and South Florida but also to the founding fathers – and mothers – of the city, like Henry Flagler and Julia Tuttle. In fact is gives a comprehensive over view with a sin fin of exhibits, photographs and videos.

A big part of the first floor is reserved for the Seminole and the Miccosukee culture and that’s where my primary interest lies. Both tribes, which are closely related, came to Southern Florida from Georgia in the early 1700 and were originally Creek Indians. Fierce and proud people, they have a history of fearless wars and an indomitable spirit of survival. 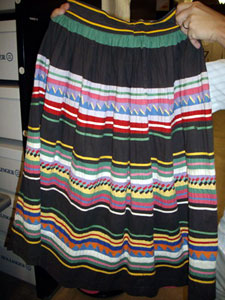 Paintings and documents trace the Seminole’s and Miccosukee’s past to today’s habitat in the Everglades. Dividers in the museum floor re-create Indian dwellings, fishing implements and their elaborate and multi colored jewelry and patchwork clothes. And that’s where I found the happy children!

On Family Friday Afternoons, the kids are allowed to actually touch selected museum pieces, to climb into early settler’s huts, and to dress up in clothing provided by the museum. Adults too can play at pirate with hats and plastic swords. Small wonder, that this museum is a hit when it comes to teach children their own history.

I was lucky to meet the curator, Jorge Zamanillo, who allowed me to visit the museum’s storage facility where I could marvel at the immense collection of beautifully crafted feather head dresses, bead jewelry and patchwork clothes, all finely stitched by hand. Hand woven baskets and Seminole dolls complete the picture of their culture. The exhibits rotate and are kept and maintained in the vaults. 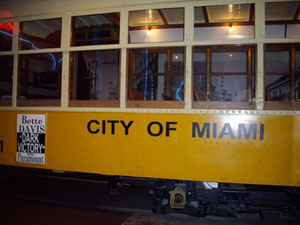 Back upstairs, I continued my turn around the exhibition floor. Miami did once have a street car and a fine example complete with bell, carried another lot of excited children who on Fridays are allowed to climb in and play passenger and driver.

Not forgotten is the tragic and heart rending story of the Cuban refuges who risked their lives in swimming nutshells to escape to the safety and freedom of the United States. You have to see one of those incredibly small and fragile boats to get a feeling for the despair which people must feel to risk a voyage across the Ocean defying storms, sharks, hunger, thirst, illness and the Coast Guard to make it to Miami’s shores. 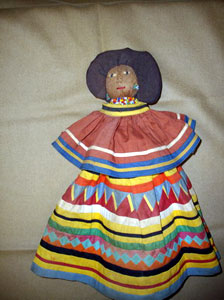 Apart from the permanent exhibitions, the museum offers workshops and guided tours. The day I visited, a Cuban chef demonstrated downstairs how to make canapés in the shape of penguins from split dates, stuffed with cream cheese and decorated with wedges of dried mango as beak and feet. Needless to say, that parents and kids alike, joined in with gusto and you could even keep and eat the birds you made. All for free.

Apart from the workshops the museum runs a very popular program of guided tours. Dr. George, one of the museum’s historians, is a Miami institution and leads tours along the Miami River, a Night Walk and a Walk around the Art Deco District among others. These tours can only be booked directly thought the museum’s website.

The museum shop downstairs, offers a huge selection of books, postcards, memorabilia and souvenirs, which are hard to resist.

Rarely have I visited a museum which has so completely absorbed my imagination and made me long to learn more of all aspects of Miami’s and South Florida’s history. If a museum is capable of inspiring that desire I think it has fulfilled its mission.