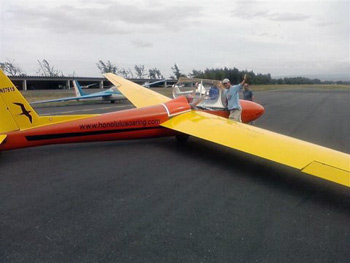 I watch as the black Mercedes slowly begins to move down the blacktop runway. As the driver shifts through the gears the car quickly gains speed and the attached towrope begins to tighten. The glider slowly starts to lift off from. Catching the updrafts the pilot continues to take advantage of the air currents and rises out of the valley. The plane climbs higher and higher into the air where, nestled in the valley below lays the city of Erlangen, Germany. I can barely see the aircraft after a while as it is soon almost out of sight. For a long time I stand there in amazement my eyes transfixed on the sight.

I have watched gliders in movies before, but not up close. That was the first time that I had seen them. I happened to walk over to the flight line that Saturday after learning about the gliders from one of my Army buddies. I watched as they went about their work with a cool determination. There was more that one glider being readied. I remember that it was a partly cloudy day, the sun occasionally peaking out of the clouds.

Later I learned that this was a frequent occurrence. Every Saturday afternoon weather permitting, the German civilians came to the airfield located just outside of the American Army base to fly their gliders. I would stand there and observe them drive on to the airfield with their gliders and then watch as they would unload their equipment and prepare everything in order to launch. The air above the little valley provided the necessary current for them to spend the afternoon soaring in and out of the clouds. They sailed on the thermals through silence on gossamer like wings. Someday I vowed to do this. 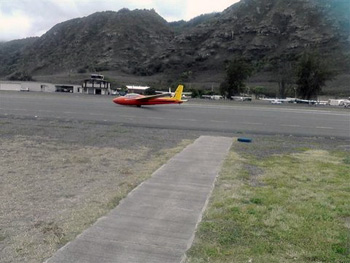 The thought stayed with me over the years. The idea of flying in a glider fascinated me but though opportunities came and went, I never took advantage of them. Finally when the opportunity became available I couldn’t miss the chance.

Honolulu Soaring is located at Dillingham Air Field in Mokuleia on the island of Oahu’s Hawaii North Shore. Close to Haleiwa town they have offered piloted gliding services since 1970. Dillingham Airfield was used extensively during World War II along with Haleiwa Field which was an unpaved emergency landing strip. I learned about Honolulu Soaring from an article I read in a guide book. The article intrigued me as it stated that they offer panoramic views of Oahu.

I didn’t know that a glider doesn’t need wind to fly. A glider just needs air flowing over its wings. It’s the pull of gravity that keeps the air flowing over the wings. When a glider flies through rising air, it climbs and vice versa.

The name of our orange and yellow glider is the Bird of Paradise. I briefly take a quick look inside of the glider. There are two seats one in front of the other, the control stick, and the pilot’s instruments. I climb into the plane’s cockpit followed by the pilot and we fasten our safety harnesses. My lanky legs straddle the underside of the pilot’s seat and the pilot instructs me not to touch the control rods of the ailerons, rudder and elevator mechanisms with my feet. Each has a specific mission.

The ailerons are the movable sections cut into the trailing edges of the wing or back of the wings. These are used as the primary directional control and they accomplish this by controlling the roll of the plane (tilting the wing tips up and down). 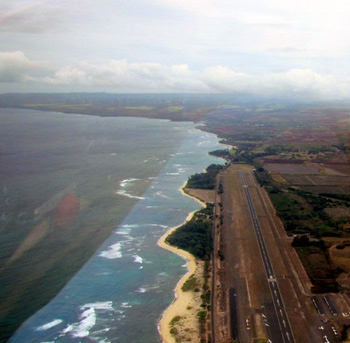 The rudder or vertical stabilizer is the vertical wing-like structure on the tail and turns the airplane. It is used to control the yaw of the aircraft by allowing the pilot to point the nose of the plane left or right.

The elevator or horizontal stabilizer is the movable horizontal wing-like structure also located on the tail. It controls the pitch of the plane, allowing the pilot to point the nose of the plane up or down.

It is a cozy fit although surprisingly it is not as tight as I would have thought in the two man cockpit and I am able to fit my 6.1 foot frame in comfortably. The pilot checks his instruments (altimeter, compass, and airspeed indicator), closes the Plexiglas canopy and glances around the cockpit doing a quick security check.

The pilot in the tow plane performs a short circle in front of us to check that are no other objects (airplanes, skydivers etc) in the flight path. He then starts down the runway picking up speed. As the towrope tightens I feel a slight bump and movement in the plane. The air current begins to lift us after we travel only a few feet and the glider begins to rise into the air. Surprisingly my stomach remains calm. The tow plane revs its engine more and we edge higher and higher into the air, turning back and forth. The view of the lush green valley below becomes clear and larger and larger under us. “My goodness what I feeling!” I think.

I take a few deep breaths, relaxing my stomach muscles and view the panoramic seen around me. I glance around the valley below looking for interesting photo opportunities. I snap a few photographs hoping that the glint from the sunlight bouncing off the Plexiglas cockpit will not interfere with the clarity of my shots. Hopefully we will see. 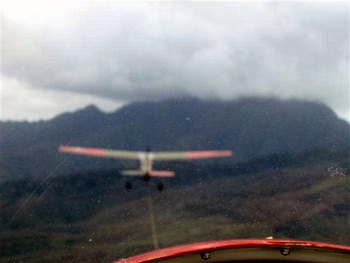 Soon I notice that the tow plane is loosing the tow rope and we are on our own. Suddenly it becomes so quiet, I can just about hear my heart beat. The rush of the incoming air into the compartment from the vent is the only noise I hear. It is like being up in the air with just you and God. I had always thought that it would be this way.

I have an incredible view of Oahu’s North Shore, the lush Waianae Mountains with their rugged cliffs laced with trails. I strain to look but I can’t see Pearl Harbor, the interior of Oahu, Diamond Head or Honolulu. Below me is the blue Pacific Ocean, with coral reefs and breaking waves. Someone once told me that the experience of soaring in a glider is about as close as you can get to flying like a bird, now I believe them. Spending time about 3000 feet over the lush landscape of Hawaii gives me a different perspective.

A glider can stay airborne indefinitely as long as it flies in updrafts. An updraft or thermals provide lift that can carry a glider higher and longer. Thermals are columns of rising air created by the uneven heating of the Earth’s surface from solar radiation. Thermals are also found in roadways and cities where the heat warms the ground and the air above it. Pilots also often tap into the winds deflected from mountain ridges or cliffs. By using these methods a glider pilot can remain airborne for hours. This is known as soaring. By finding and using lift sufficiently pilots can fly cross country and remain in the air all day.

We catch the thermals as we fly over the green valley toward the mountains. In the distance on the side of the mountain I see large white objects and as we fly closer I can make out a windmill farm of over 23 windmills. Turning 180 degrees we head toward the Pacific Ocean with its various shades of blue, the waves lapping at the shoreline. We pass over the airfield and I can see a sandy beach all along the coastline and below are pineapple farms and harvested fields plowed and ready for a new crop.

The pilot suddenly performs a sharp turn and we begin to descend to the airfield. We skim over the trees and come closer and closer to the earth. I can barely feel the ground as the singular wheel touches down gently on the runway and we roll a few feet and slow finally to a stop. It is finished. What an exciting way to spend thirty minutes flying in the clouds, something I’d wanted to do since the time when I had observed my first glider flight many years ago in Germany. 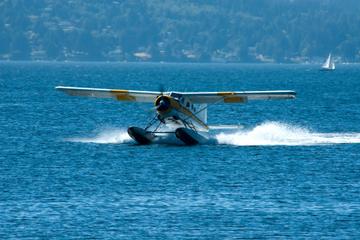 ♦ There are a variety of direct and indirect flights of airlines and prices to Honolulu, Hawaii.
♦ There are also a variety of Hotels and condos to choose from.
♦ My favorite restaurant in Honolulu is Jimmy Buffett’s Beachcomber, 2300 Kalakaua Avenue, Honolulu, HI 96815. [IT CLOSED IN 2016 – ED]
♦ Honolulu Soaring or 808-637-0207 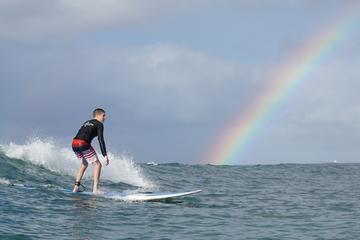 About the author:
Larry Zaletel is a freelance travel writer, an avid and dedicated traveler, and recurring visitor to Europe, the Caribbean, and the Far East. He writes about the various people that he has met and places that he has visited during his travels.

Photos by Larry Zaletel:
Thumbs-up landing
Touchdown just as we landed
Soaring over Dillingham Airfield and the Pacific Ocean
Our tow plane