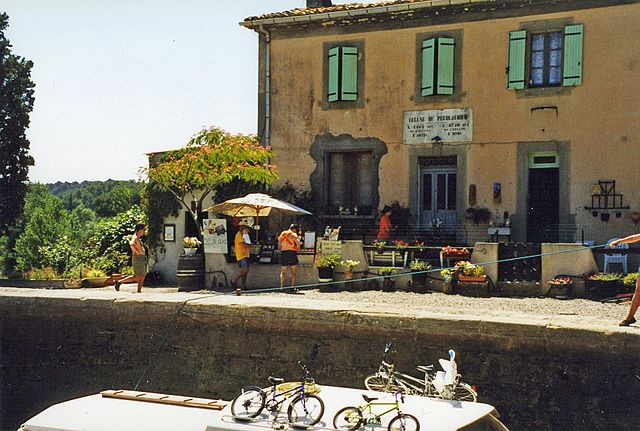 We were planning a long camping trip to France. We had dreamed for years of hiring a boat on the Canal du Midi but were always put off by the expense, so my partner came up with the idea of cycling its length: inexpensive, a good way to see the countryside, meet the people and great exercise. Blithely ignoring the inner voice, which warned of aching legs, tired muscles and a sore derriereToulouse, I enthusiastically agreed. 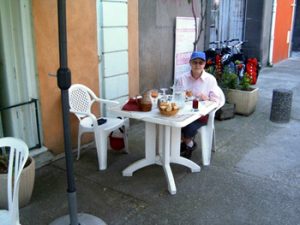 The idea for the Canal du Midi was first conceived in 1516 by Francis 1st, who employed Leonardo da Vinci to apply his genius to the project. The purpose of the canal was to provide a shortcut between the Atlantic and the Mediteranean, by connecting the Garonne River to the Etang de Thau on the Mediterranean. This would cut down sailing time and avoid the Barbary pirates. Unfortunately, Signor da Vinci couldn’t overcome the problem of supplying a sufficient water supply to the summit.

In 1662, along came Pierre-Paul Riquet, who believed he had the answer. In 1666, after much political string-pulling, the go-ahead was given by Louis XIV. The canal was opened in 1681 and went by the name of the Canal Royal de Languedoc. It was also referred to as the Canal des Deux Mers (Canal of the Two Seas). 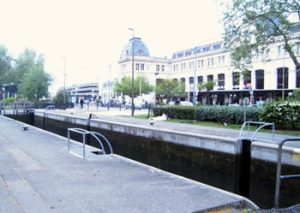 The canal is 240 kilometres long and runs from Toulouse to the Mediterranean port of Sète. It rises through the plain of Lauragais to the summit at the Col de Naurouze, altitude 190 metres. Riquet succeeded in bringing up an adequate water supply by an ingenious feeder system, bringing water into a series of reservoirs. It’s interesting to note that much of the skilled labour was supplied by women from the Pyrenees. Many of these mountain towns housed ancient Roman baths and the women had a good knowledge of hydraulics. The locks are a curious oval shape, the sides acting like horizontal arches, to prevent the land from collapsing inwards. Clever and graceful.

Riquet was 63 when he started this project. The same age as I was when I set off on this mini cycling adventure. Sadly, he died shortly before the canal was finished. I was luckier and survived the bike ride, all five days of it. 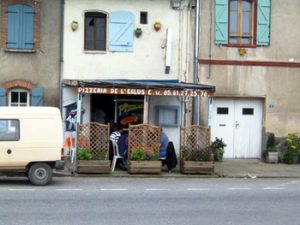 To venture into rural France is to step back in time. You won’t find American cheeseburger or fried chicken chain outlets, but there are plenty of tiny restaurants and bars where you can buy proper food. Even the food at filling stations is worth eating. In the smaller, family run restaurants, you’ll often find the grandma sitting at a table shelling peas or washing lettuce in a big bowl. The atmosphere is always warm, especially if you try to stumble through a few words of French. In fact, you don’t have much choice as nobody will speak to you in English. Don’t let that put you off. Have your phrase book and sense of humour to hand. The French are usually keen to improve your vocabulary, grammar and pronunciation.

We spent a pleasant few days meandering through small towns and villages to our planned base camp at Marseillan Plage on the Mediterranean. How exotic it is to be in the South of France, but I wouldn’t recommend Marseillan as an icon of culture. It’s full of bars, fast food restaurants and ice cream parlours. We’d planned to stay at Camping Municipal – they have them all over the country and they’re cheap and cheerful – but it was too early in the season for it to be open. We found a place at Camping Robinson, where we were able to leave our car and tent for the princely sum of 2 euros per night.

We allowed ourselves a day to sort out train tickets and to pack panniers for the bikes and then we were off. We’d planned to take the train from Marseillan but they didn’t have room for the bikes so we had to go from Agde, a horrendous bike ride away. I hate cycling in traffic but I found that the continentals are a lot more polite and considerate to cyclists than they are in UK. 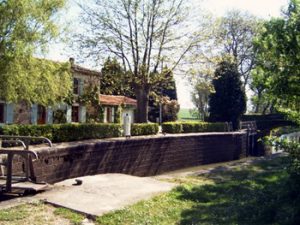 The train station was full of cyclists, all ages, shapes and sizes. It’s a miracle to me how we all fitted onto the train but we did somehow, although it was a bit of a squash.

Everyone piled out at Toulouse, where we stayed the night in a small hotel. I don’t recommend Toulouse either. It was full of beggars and tramps sleeping rough under bridges. We stored our bikes for the night in the hotel laundry room. We were so keen to quit the place the next day that we forgot to buy a picnic for our journey so we stopped for lunch at Montisgard, where we had an excellent pizza at the Pizzaria del’Ecluse (pizzaria of the lock).

We were booked into a hotel for the night at Avignonet Lauragais. It was the back of beyond, just some houses and the hotel/restaurant/bar/tabac/depot de pain (place to buy bread). A charming young man proudly threw open the door to our en-suite room, which was just that. The bed, a shower, wash basin and WC were all in the same room! If you sat on the toilet your knees were touching the bed. We were too tired to care. It was very cheap. They didn’t charge for me at all as I only ate a green salad for dinner. 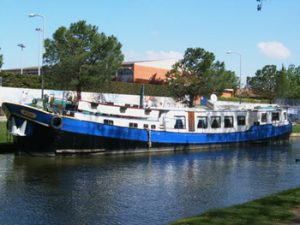 The next day’s journey took us to the charming town of Castelnaudary, the main port of the canal and first settled in 1103. It claims to be the world capital of cassoulet, a stew made from haricot beans, confit of duck, Toulouse sausage and bits of pork hock or pork skin for flavour.

The weather was hot and we were glad of the shelter of the ancient plane trees planted along the side of the towpath. We picnicked on the edge of a vineyard with a view of mountains in the distance.

That evening we stopped at the medieval fortified city of Carcassonne. There’s evidence of Neolithic settlements in the area as early as 3500BC. The town was taken by the Visigoths in the 5th century and in 1209, during the Crusades, it was conquered by Simon de Montfort. The Lower Town, on the other side of the River Aude, was built in 1247 but destroyed by the Black Prince during the Hundred Years War so it’s obviously a lot newer than the old town. The old city is best approached from the bottom of the hill as the view of this imposing fortress is spectacular. 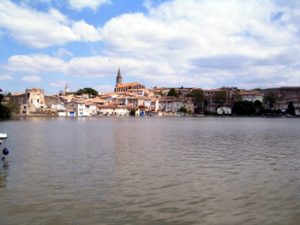 The next overnight stop was Homps, where we treated ourselves to dinner, bed and breakfast in the fabulous Auberge de l’Arbousier. It was well over our budget but worth every penny for the gorgeous room, wonderful bathroom and delicious food. It’s on the canal bank and was originally an old farmhouse.

Thank goodness for a relaxing stay at Homps because the next day was a bit of a nightmare. The going was rough, it was hot, and my saddle sores were screaming at me. The highlight of the day was seeing a large turtle swimming in the canal. We stopped to inspect the flight of locks and the inclined plane at Beziers but I was too tired to appreciate them.

We found a nice hotel, and guzzled a cold beer before taking our bikes to their overnight garage. It’s like travelling with a mule. You have to bed down the transport before you can see to yourself. Thank goodness we didn’t have to feed the bike, just pump air into the tyres and tighten up bits that had shaken loose. 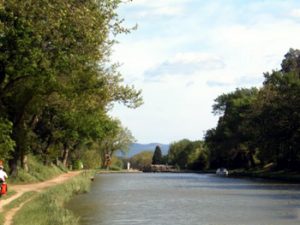 On our last day, it wasn’t a long journey in miles but the going was so rough we had to walk for part of the way. We collapsed into the restaurant where we’d had lunch on the way out. It was like coming home. They remembered us and drank many toasts to our intrepid spirits.

It was a great relief to arrive back at the campsite to find the tent still standing. We were sore and exhausted but proud of ourselves and happy. If anyone is encouraged to attempt this journey, don’t be fooled by the promise of a good towpath. It’s stony, rutted, full of tree roots hard going for most of the way. It really needs young fit legs, a mountain bike and a cast iron bum. We were there in May, when it was already warming up. Any later in the year it might have been too hot. 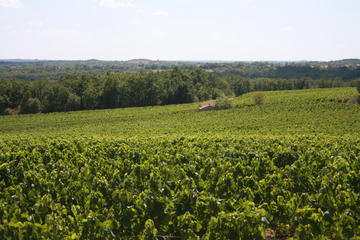 You can fly into Toulouse, Carcassonne or Beziers. The French railway system is very good and an excellent way to get around if you don’t want to hire a car.

Where to stay and eat:

If you’re feeling self-indulgent, the very best way to enjoy the canal and its surrounding area is to travel on a hotel barge such as the 100 year old Dutch clipper, Rosa.
France boating holidays and river cruises

Chez Felix
11 Place Carnot (the market square), Carcassonne (Lower Town)
This nice little restaurant was established in 1945 and serves simple but delicious food. Lunchtime only, as far as I know, and the menu is under 10 euros.

About the author:
Shelagh Nugent has had more jobs than most people have had hot dinners. She ended her working life as editor, small press publisher and freelance writer. She has had many short stories published in small press and national magazines, has had two books published, written many articles, mainly writing related and this is her first attempt at travel writing. She is happily retired and likes to spend as much time as possible travelling in UK and Europe with her partner, Kim. They both enjoy camping, walking, cycling – and wish their bodies were a bit more up to the job but will persevere to the bitter end.

Photo credits:
Pech Laurier Lock – Ecluse – on the Canal du Midi by David Broad / CC BY
All other photographs are by Kim Kaminski and Shelagh Nugent.