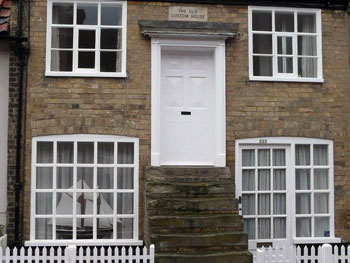 There was a time when I lived on the edge of East Anglia. Just to the east of Peterborough, the town where I’d settled, there are flat wetlands – great empty spaces that stretch out to the horizon under big skies. It is a landscape that has a kind of bleak poetry to it. It’s a barren, harsh place – the sort of place you imagine could be inhabited by the ghosts of highwaymen, farmhands, beggars and thieves. It’s a place where houses sit marooned in the fens like becalmed ships at sea; a place where the inhabitants look out at outsiders with deep suspicion and keep their doors firmly bolted. It’s a hostile landscape, the kind of place where you have to be tough and insular to survive.

East Anglia is England’s little Holland. The land is flat and expansive like a weedy, reedy ocean. Sometimes it’s an ocean of cabbages and turnips too. You know you’ve reached the farmlands of East Anglia when the pungent stench of root vegetables hit your nostrils. There are pockets of softer, rolling countryside as well, but mainly East Anglia is flat, very flat. 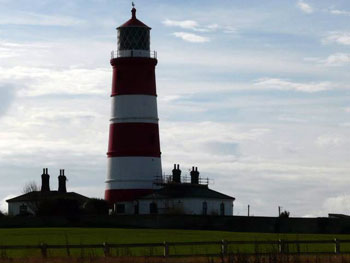 Up until the Middle Ages large tracts of East Anglia lay under water. Only the higher land was free from flooding. I could never understand why the cathedral town of Ely is referred to as an ‘isle.’ A hilly place surrounded by land and no water in sight, it certainly isn’t an island. But once you know the historical geography of East Anglia, it becomes clear. Slowly, slowly the wetlands, the lakes and water systems were drained and reclaimed from the sea. Since then, man and nature have been at war. In the main, man has won. Clever, he’s built dykes, installed pumps and constructed defences. But nature is a force to be reckoned with. Man has fought the sea, and the sea has, on occasion, won.

Over a decade ago, I moved away from East Anglia to the Peak District. Some people, particularly artists, love the light, the big skies and the big landscapes of East Anglia (such as John Constable), but for me it was a relief to get back to the hills. It felt cosy and comforting after the emptiness and bleakness of the Fens. 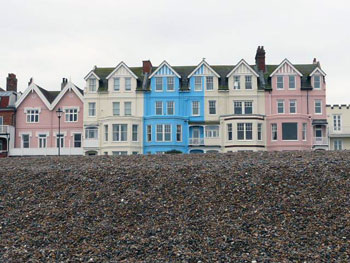 Recently, I returned to East Anglia for an autumn break with my family. All the time I had lived there, I’d never visited the Norfolk Broads. The Broads are made up of rivers and lakes and wetlands. The area, rich in wildlife, is popular with visitors for boating, kayaking and canoeing as well as cycling. Between the wetlands, there are pretty villages wrapped in the folds of gently undulating countryside: thatched cottages, dwellings of flint or warm brick, traditional pubs and duck ponds.

I also wanted to explore the Norfolk and Suffolk coastline, most of it still unfamiliar to me – old-fashioned seaside towns and villages like Southwold and Aldeburgh that echoed the fenland bleakness, particularly in winter. 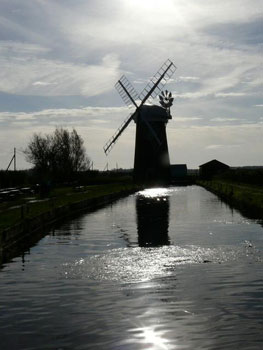 And so it was when we visited Aldeburgh on a cold, bright day in November. Fishing boats had been shored up on the pebbled beach; guest houses were winding down and closing up for winter; the beach was a place for a brisk walk, head down against the icy wind, coats pulled close around the neck. Dogs were allowed on the stony beach again.

As we waded through the pebbles, tall Victorian terraces seemingly rising straight out of the shingle, we came to a long spit. Part way along, we could see a Martello tower, one of the squat circular brick buildings that had been erected along the British coast to defend the country against Napoleon. We headed out onto the narrow spit towards the tower. Other than the lookout, there was just a boatyard and boathouse. Yet once there’d been a thriving commercial centre here. A map from 1588 showed a busy quay and a long row of tiny store huts. Boats were built and repaired here and merchant boats off-loaded their cargo at this point.

Slaughden, the village on the spit, had always been vulnerable to storms. The last house in the village was aptly called ‘The Hazard’. Once it had been a thriving farm, but it lost its 30 acres to the sea – a farmhouse without its land. A non-farming family took it over in 1922. In a space of a few years, they had been flooded out four times. Then in 1926, there was a storm so severe, the inhabitants woke up to find the shingle had reached the second floor. The sea had finally defeated them and they moved along the spit to the village of Aldeburgh. In the great storm of 1953 the rest of the village succumbed to the sea and the broad slice of land was reduced to a narrow spit.

Our week on the Broads had come to an end. It was time to return to our home in the hills of the Midlands. We decided to wind our way back along the Norfolk coast. We headed along the A47 through the Broads, a route as straight as any Roman Road. The feeling of being at sea was enhanced by the roll of the road – our car travelling over a wet, shifting landscape. Nothing interrupted the ocean of scruffy wetlands but for the odd isolated windmill, sails spread out under big skies. 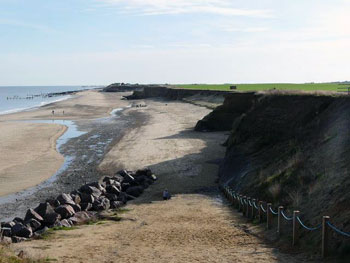 We stopped off at Sea Palling, another seaside resort devastated by the storm of 1953. The sea had breached and ripped through a section of the protecting sand dunes and carried away the Longshore Café. Several other homes, a bakery and a general store were smashed up too. Villagers clung to the roofs of their homes as the ocean engulfed them, waiting to be rescued. Seven people died and thousands of acres of land were destroyed. We sat in the café-cum-amusement arcade, drinking bitter coffee and reading the faded newspaper cuttings adorning the wall. It made for sobering reading among the duke-box pop and random slot machine sounds.

We climbed the road that rose like a wall over the dunes to the beach, a flood barrier in place to keep the sea at bay in the event of a storm. Long off-shore islands of Norwegian rock form another defence and concrete groynes provide additional protection. They are ugly manmade structures in a pretty, natural setting. Despite all efforts to control the sea, some argue that it is useless to protect the coast here: the sea will prevail, sooner or later.

We drove further along the coast and came to Happisburgh. A lighthouse towered behind the village. We found our way to it and walked across to the coast. Signs warned of the danger of erosion. We could see how nature had taken great ‘bites’ out the land. The neighbouring medieval village of Whimpwell has long since surrendered to the sea. Only the name survives enshrined in the names of lanes and buildings.

And slowly the sea has been ravaging the coastal land around Happisburgh, continuing to threaten this modern day village. On one day in 1845, a field was drilled with wheat; by the next morning it had disappeared. In 1855 a farm and its out-dwellings had yielded to the ocean too. The North Sea has continued to eat away at the coastline over the decades at a steady pace. In 1953, a bungalow, 15 feet from the sea one day, was dangling over the edge of the cliff the next.

It’s a tough place, East Anglia. The sea giveth (up) and taketh away. This bleak and lonely landscape has a fragile and sometimes terrible and terrifying beauty.

Postscript: Three days after completing this article, the sea in East Anglia had ‘taken away’ again. Just this week (December 2013) a severe storm combined with a spring tide caused devastation on the East Anglian coast. It is believed that this storm was every bit as severe as the storm of 1953. However, unlike 1953, there was no loss of life – thanks to advances in meteorology. A large evacuation operation took place, moving those at risk to shelters away from the coast. Despite improved coastal defences, on the 5th December, another slice of coast was sacrificed to the sea: three properties fell into the sea, and another four were seriously undermined. 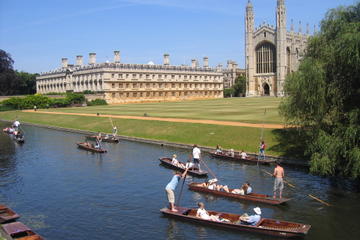 Oxford and Cambridge Tour from London

♦ Visit Cambridge, the ancient university town in Cambridgeshire.
♦ Pop in on Her Majesty at Sandringham Estate, one of the Queen’s residences near King’s Lynn.
♦ Holkham: a wide expanse of beach fringed with pine trees. Walk through the wooded dunes.
♦ Wells-next-the-sea: Not very next the sea, a long estuary winds its way through the marshes to this this charming coastal resort. Have a go at crabbing or take the little train down to the bay lined with colourful beach huts.
♦ Blakeney: A pretty flint villages. Take a boat trip to Blakeney Point to watch the seals.
♦ Lavenham: One of the finest medieval villages in England, ancient half timbered, crooked houses lean over narrow streets.
♦ The Norfolk Broads: Best explored by water. Hire a motor boat, canoe or kayak to visit this area rich in wildlife.
♦ Southwold: Visit the pretty pier, the lighthouse and handsome town.
♦ Windmills and village pubs: Hire a bike to cycle the flatlands or gently rolling countryside of Norfolk and Suffolk. Stop off at villages for a pint of the local brew. Visit one of the windmills that dot the waterways. 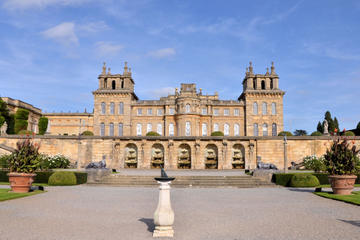 All photos are by Helen Moat.