Two big names in the travel industry met in Paris in the autumn of 2018. The exhibition titled “Croatia-full of colours” was hosted by Carrousel du Louvre underground shopping centre at the Louvre in Paris. Organizers expected that a few million people would see it until November 20, 2018. 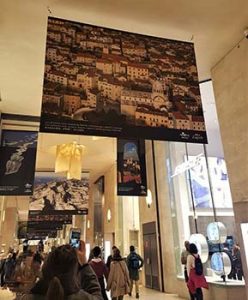 The importance of this exhibition is also in showing many possibilities and roads less traveled, besides the famous city of Dubrovnik, Split or some of the Dalmatian islands. In Croatia every town, every village or region has hidden secrets and places worth exploring.

The Istrian Peninsula and the island of Krk are considered the cradle of Glagolitic script- the oldest Slavic alphabet. Near the Istrian city of Buzet, between the towns of Roc and Hum, the unique Glagolitic Alley – the eleven memorials, were set as a monument of Glagolitic culture and literacy.

During the summer months, the school of Glagolitics regularly takes place in Roc. 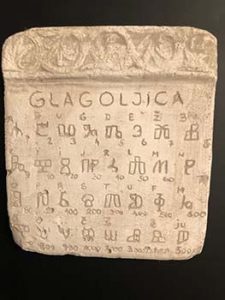 The origin of the Glagolitic script is related to the work of two monks, Cyril and Methodius, in 9th century. They were sent by the Byzantine Emperor to Great Moravia to spread Christianity among West Slavs in the area. To translate the old Christian liturgical books into the old Slavic language was not an easy task since the words of the Slavic language could not be easily written in the Greek or Latin alphabet. Therefore, Cyril invented a new script – Glagolitic, which was based on the local dialect of the Slavic tribes. After the deaths of Cyril and Methodius, the Glagolitic alphabet faded in Moravia, but Cyril and Methodius’ students continued spreading it to the West. In fact, the Glagolitic alphabet was only preserved and used by the clergy of Croatia until the early 19th century.

The name “Glagolitic” came from the verb “Glagolati” in old Slavic, which means “to speak”. In Croatia (Dalmatia) even the Pope Innocent IV in 13th century officially granted the Croatians of Southern Dalmatia the unique privilege of using their own language and script in liturgy, instead of Latin. The permission was extended to all Croatian lands, mostly to the Adriatic coast.

Therefore, if you like to explore history through written words and monuments, from the Glagolitic Alley in Istria, you may have a nice drive towards the cities of Opatija and Rijeka, also interesting travel destinations, then cross the bridge to Krk and you will be welcomed with another historically unique area.

The island of Krk is the largest Croatian island (some consider Cres the largest), in any case, it is an island, but conveniently connected with the main land by a bridge. Even with the first steps on the island or even earlier, on the bridge, you are facing an interesting fact from modern history. The bridge, when constructed in 1980, had the privilege of being the bridge with the longest reinforced concrete arch in the world. 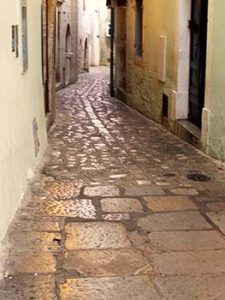 The next stop on your discovery trip could be just a couple kilometres (miles) from the bridge, a town of Omisalj – across from the airport. Here you will find yourself in a typical Mediterranean town with old yellowish stone houses and buildings. The town centre is a cobblestone plaza surrounded with stone houses and a church Our Lady of the Assumption and a bell tower. A few cafes and restaurants will offer pleasant shade under umbrellas on hot summer days and the opportunity to have a break with excellent Mediterranean specialities (seafood or pasta “surlice,” or smoked ham) and local wine.

After a break you have the option to discover the site of the nearby ancient Roman city Fulfinum Mirine or you may continue your Glagolitic discoveries on island of Krk. On Krk you will find a trace of this old alphabet and historic documents everywhere.

You may visit the village of Gabonjin where you will find another Glagolitic park and artistic work of local artist Sretko Usalj, who devoted a lot of time to historic research of Glagolitics.

In a city of Vrbnik, a city on the cliff, in the summertime you may join the Glagolitic workshop and learn the alphabet and write your own name in this old script.

The church of St. Mary was mentioned in 1325 and has valuable Glagolitic manuscripts. The town’s library holds more than 10,000 titles, of which the most valuable is the World Atlas by Johann David Kochler printed in 1718 in Nuremberg. One of the two known copies is in Vrbnik, while another one is kept in Cambridge, England.

You can’t leave Vrbnik, before you try or purchase a bottle of the original “Vrbnicka Zlahtina” golden white wine.

If you continue towards the city of Punat, you may take a short boat trip (800 m from Punat) to the tiny island of Kosljun where you may visit the Franciscan monastery. At the entrance you will be welcomed with the Glagolitic inscription “Peace and Well-being” and the Frankopan family coat of arms, who once owned the island. The monks collected numerous valuable items over the centuries and kept them in the monastery and the museum which has a rich ethnographical collection.

Close to Punat is the city of Krk. This centre of island Krk has an urban history of 3000 years. Even the ancient Romans called it “the most splendid city of the people of Krk.” 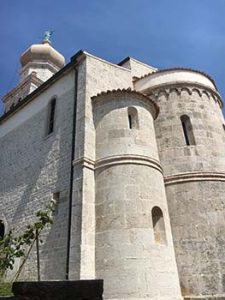 The old part of the city is surrounded by ancient walls which date back to the 12th century. The cathedral “Assumption of Mary” was also mentioned in written documents from the 12th century. In the cathedral there is a silver altar cloth made in the 15th century, which in 1980’s travelled to Paris – France where it was exhibited as a part of the Yugoslav and Croatian cultural heritage.So, another meeting of Croatia and France. Within the city walls you could find many secrets of the city’s rich history; layers of history from pre-roman and Roman times as well as Medieval times. Polished cobblestone narrow streets, polished by millions of feet throughout history and gray-yellowish stone houses may astonish you, but you may get lost in the labyrinth of the streets. There is a local secret how to avoid being lost. All the streets that lead somewhere have a line of the stones in the middle, in the direction of the street. If the old street does not have these stone signs, it most likely is a dead end. I found myself lost a few times, but every time I also discovered something new and interesting such as an old stone water well or a stone arch over the entrance with the Latin or Glagolitic inscription. The view from the top of the walls is absolutely splendid. This summer my daughter and I climbed the narrow stone stairs again which led to the top of the walls. It was hard to decide which view was more magnificent, the one overlooking the harbour and the open sea or the one of the bell- tower and the old tiled roofs against a clear blue sky.

To round your historic trip, you should visit Baska and the small village of Jurandvor. In Jurandvor the priest Petar Dorcic discovered on the ground of the church of St. Lucy a stone tablet (199 cm long and 99 cm high) with an unusual inscription in 1851. He informed the historians about his discovery. In the years to follow, the mysterious text was decoded and historians concluded that this tablet called “Baska tablet” (Bascanska Ploca) from 1100s is one of the oldest documents written in Glagolitic alphabet and it became one of the icons of Croatian culture and literacy. In 1934 the original stone tablet, in order to be protected from further degradation, was placed in the entrance of the Croatian Academy of Science and Art in Zagreb – capital of Croatia. Today there is a cast of the Baska tablet in the church of St. Lucy in Jurandvor. [Photo at top.]

Finally, to relax from the history and have fun at the beach, you will find the well-known Baska two-kilometer long pebble beach nearby or you may try the several hill trails which offer great views. 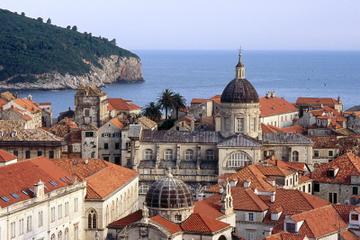 1) The best time to visit the area and locations is June or September, but to attend the workshop in Vrbnik it should be July

4) The driving distance from town of Buzet in Istria to city Rijeka is approx. 52 km (32 miles)

7) English and German languages are widely used at the restaurants, hotels, tourist offices and agencies 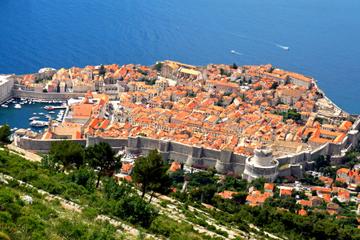 Sonja Slijepcevic is a freelance travel writer and photographer, a member of the International Travel Writers and Photographers Alliance (ITWPA). For years she has been combining her love of travel, passion for photography and professional career in the project management field. She likes meeting people from different cultures and backgrounds, enjoys history and art, and likes to write about these experiences. Some of her photography has been published in different Canadian magazines and newspapers.

Sonja was born in the capital city of Croatia, Zagreb and has been living in Canada for 25 years.