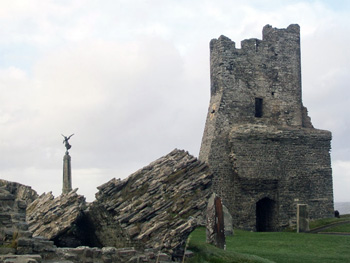 A woman in a ruby dress sits upright amongst golden marsh reeds. Her red hair hangs past staring eyes to her arms. Her dead body is found by two boys walking a white horse. The wide expanse of marshland is framed by grey mountains and blue sky.

That is how the fourth and last episode, The Girl in the Water, of the first Hinterland series started. The crime drama followed in the footsteps of Nordic noir, and was filmed around Aberystwyth on the west coast of central Wales.

Aberystwyth is a Welsh language word meaning mouth of the Ystwyth. The town is unofficially considered the capital of Ceredigion county, and often called Aber by locals, as it’s the biggest Aber in the region. Its population of 15,000, supplemented by thousands of students in term time, is the largest for seventy miles north, east and south; Ireland is much farther west, beyond the Cardigan Bay horizon and over the Irish Sea. 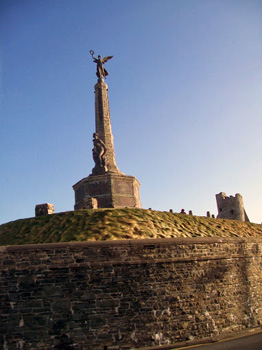 Hinterland was the first network television series (a combined Fiction Factory production for Welsh language channel S4C and the BBC) filmed in Ceredigion; probably because its lack of motorways makes it difficult to reach for film crews. Its stark location was part of the appeal though, according to series producer Ed Talfan on the BBC Hinterland blog page:

‘We ended up going with Aberystwyth because there is a stark beauty to it. It feels like the last place – it’s the end of the railway line and there’s an inherent drama to it because of that.’

The Cambrian railway line links Aberystwyth with England via Shrewsbury or Birmingham. The journey west becomes spectacular for natural scenery lovers after Newtown, when the wild unpopulated Cambrian Mountains tower over the line to the south. As their highest peaks are passed, the Dovey (Dyfi) estuary takes over to the north. On the other side of the water, whether the mountain horizon is commingling with cloud or sky, it captures my imagination until the seaside town of Aberdovey comes into view on the other side of the Dovey mouth. 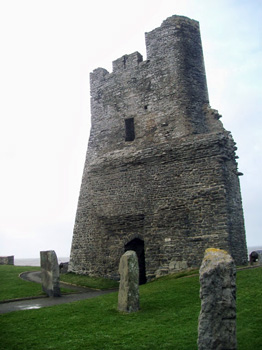 I wrote an article about the Cambrian line railway journey still available on what was Suite 101 years ago, and this year wrote a poem about a possible railway journey from Scarborough on Britain’s east coast to Aberystwyth on the west.

In-between, I walked around Aberystwyth Castle for the first time. I usually visited the north beach to look out at Cardigan Bay if there was time between arriving in Aber at the end of the train line and my bus departure taking me deeper into the hinterland.

A legend first written down in 1250 tells of a sunken city in Cardigan Bay; a Welsh Atlantis; called Cantre’r Gwaelod (The Lowland Hundred).

The story was resonant on a December evening in 2013, as a stormy sea enticed me beyond the pier, and I walked around the promontory housing the castle for the first time as far as I remember.

Arriving in daytime the following year, the sea was even wilder, with Cyclone Dirk already having caused extensive damage to the Aberystwyth seafront. It would cause much more destruction a fortnight later. 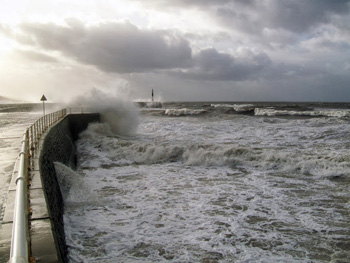 Circling the headland again, I saw the waves looked even higher as they crashed onto the south beach and defensive walls between the sea and harbour. So I walked down as far as I could, and was rewarded with excellent views and photos of the sun setting over the highest southern peak; between swirling grey clouds and above seawater flying high into the air after battering the promenade.

On the way back I entered the castle grounds for the first time, and thought it was more impressive than it is renowned; having grown up in Ceredigion I wasn’t really aware of Aber’s castle. Although there are only three towers and walls still standing, there is enough left to imagine the castle’s size and scale.

The castle dates from the late 13th century. It was built by Edward I after he invaded Wales to subjugate it. The town grew up around the castle in the 14th century, but the castle was already deteriorating. 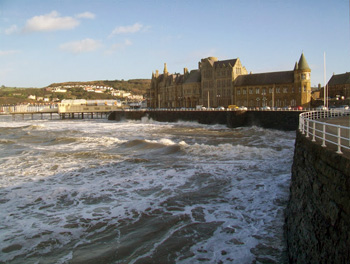 A Welsh uprising against the rule of Henry IV under Owain Glyndwr captured the castle in 1404. He crowned himself Prince of Wales, and held a parliament at Machynlleth. Mach is a few stops on the trainline east of Aber, where the train can divide into two: one continuing east-west, and the other riding the south-north coast line to Pwllheli. The rebellion lost the castle in 1408, and order was restored under Henry V by 1415.

There were fortresses in Aber before Aberystwyth Castle. A fort was built just south of the current town in the 12th century after the Normans swept west from England on the way to Ireland after defeating Harold at the Battle of Hastings in 1066.

Also on the southern outskirts, overlooking modern Penparcau, a Bronze Age hillfort has been found and partially excavated on Dinas Maelor. In Penparcau, evidence of Mesolithic Age flint knapping suggests the area was populated in the Stone Age. 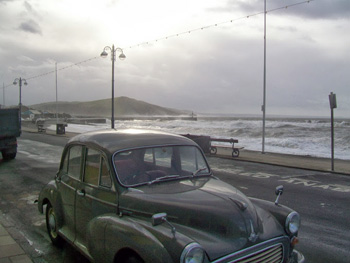 Aber town centre is quite small and easy to navigate. Walking out from the station the north beach is straight ahead past a pub sarcastically named after Lord Beechings. Lord Beeching’s report closed down the fifty-miles long Aberystwyth to Carmarthen train line linking mid and south Wales in 1965.

Since Aber’s harbour was built, the River Ystwyth doesn’t actually run through the town, but the River Rheidol does. Aberystwyth is at the confluence of the two rivers. There is a scenic Vale of Rheidol train line from Aber to Devil’s Bridge on a narrow gauge steam locomotive climbing 700 feet (200 metres). 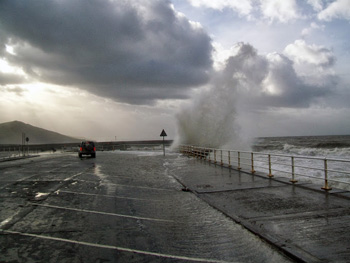 Under the bridges, the Mynach falls 300 feet in five steps to the Rheidol. The Devil’s Bridge name was inspired by a local legend that thought the original bridge was too difficult to build, so the Devil must have built it in exchange for the first soul that crossed. An old woman tricked the Devil by sending her dog onto the bridge. It’s a nice story, but a shame for her dog!

Devil’s Bridge was the setting for the first episode of Hinterland, when a missing woman’s body was found on one of the steps under the Mynach water.

If I was Hinterland’s protagonist, DCI Tom Mathias, investigating the series evidence mentioned in this article, I’d think the water, women and horses clues point to important symbols in Celtic mythology; while red is the symbolic national colour of Wales. I’d conclude that Hinterland used ancient symbolism and cultural folklore in a modern Welsh crime drama, and that its brooding gloomy characters and storylines mirror the normally grey weather and proud chequered history. Most of the Hinterland action took place in the countryside inland from Aberystwyth; a natural world altered very little since tribes first travelled the Cambrian Mountains after the last Ice Age.

About the author:
Marc Latham travelled to all the populated continents during his twenties. He studied during his thirties, including a BA in History, and has been writing during his forties. He writes out of the www.greenygrey.co.uk website.

All photos by Marc Latham.