The beauty of Vienna, Austria is heard in the music at concert halls, the opera, churches and festivals and seen in the architecture, fashion, museums, art exhibitions, state outdoor parks, and markets. The Viennese residents enjoy a relaxing, congenial good life.

Austria’s capital, Vienna moves at a slower more relaxed pace. Vienna embraces both the Imperial and Contemporary ideals. Vienna is the “City of Music” and “Paris of the East”. The music and beauty of the city are unlike any other city in Europe. 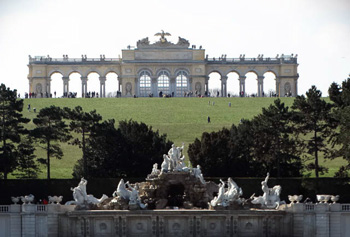 The Ringstrasse or “The Ring Road” is a 3-mile long loop with a grand walking boulevard. The major Ringstrasse, a pedestrian-friendly historic center, has been designated a UNESCO World Heritage Site. Cafes and restaurants line the cobblestone side streets. The culinary scene cannot be overlooked. Located in the Hotel Sacher and the adjoining Cafe, a visitor cannot miss the infamous Sacher-Torte. Cafes abound throughout the avenues with bakery, meal tortes and beverages filled with visitors and Viennese people socializing. Patrons linger and enjoy an outdoor experience of a favorite pastime of people watching. Demel is the ultimate Chocolate shop filled with chocolate lover’s dreams. The Ringstrasse, is the main avenue for prestigious hotels including the Imperial Hotel. The Imperial Palace, Natural History Museum, Kunsthistorisches Museum, Vienna State Opera and the Parliament are located on the Ring. In the town square is St. Stephen’s Cathedral, a Gothic structure built in the 12th century. The Hofburg Imperial Palace, the center of the Habsburg Empire and other attractions are nearby. A morning church service mesmerizes the congregation with the famous Vienna Boys Choir, voices perfectly blended as if listening to an angelic choir.

Emperor Franz Joseph I ruled the Austro-Hungarian monarchy for 68 years. The year, 2016 marks the 100th anniversary of the Emperor’s death. Franz Joseph was the longest-reigning emperor of Austria. Franz Joseph, one son of Maria Theresa’s sixteen children, married Empress Elizabeth, best known as “Sissy”. She was extremely beautiful with long flowing dark hair beyond her knees which took her attendants two hours each day to brush and style. She was exercising and dieting continuously to maintain her 20-inch waist and was recognized as a true beauty by the Austrian people. Franz Joseph was born at Schonbrunn Palace and died there in 1916 at the age of 86. The property today is preserved as a museum founded by the Austrian Republic. The Palace has been used for important events such as the meeting in 1961 between President John F. Kennedy and Soviet Premier Nikita Khrushchev. 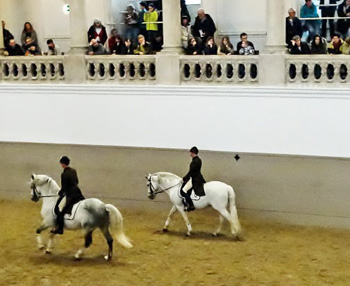 The Schonbrunn Palace, a 1,441-room Baroque palace is one of the most important architectural, cultural and historical monuments in the country. The history of the palace and gardens spans a period of over 300 years of successive Habsburg monarchs. This palace was the former Imperial summer residence. In 1569, the Holy Emperor Maximilian ll purchased the land. It served as a hunting ground and fishing pond. The name Schonbrunn means ‘beautiful spring’ which dates to the artesian well which provided water for the court. From 1638-1643, a palace was added and in 1642, the first mention of Schonbrunn appeared. In its present form today, the place was remodeled in 1740-50’s during the reign of empress Maria Theresa who was given the estate as a wedding gift. Franz l redecorated the palace exterior in neoclassical style which exists today. Forty rooms are opened to the public with frescoes adorning every room, gold gilding on the ceiling and walls and the exquisite décor throughout the palace.

Within the Schonbrunn Palace is the Imperial Palace. Here 20 rooms of the Baroque Period Style are open to the public covering eight sides. The Imperial Palace houses the Emperor’s Crown, scepter, cross and garments worn over the ages. Religious artifacts and precious stones are seen throughout the exhibit rooms. Large and small works of art adorn the walls. 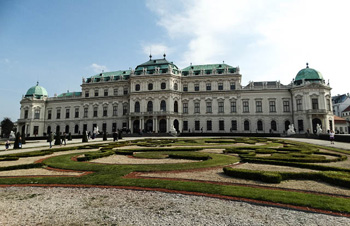 Located behind the Palace are the Schoenbrunn Gardens. These acres contain a sculpted garden, orangery, maze, long trellised walkways and quiet seating areas. Various movies and major concerts have been filmed on location. Along the Great Parterre are 32 cultures represented by deities and virtues. At the top of the 200-foot hill, is the Gloriette structure. Destroyed in WWW ll, it was restored in 1995. Today it houses an observation deck and café. In front, is the Roman Ruin which consists of a rectangular pool enclosed by an arch with lateral walls. A figural sculpture symbolizes the rivers Vltava and the Elbe.

Hasburg Palace is where the family resided during the remainder of the year. This palace is as ornate as all the other palaces.

The Spanish Riding School with Lipizzaner Stallions demonstrated a morning training session in the Emperor’s Baroque riding hall. Their noble gate and strong breeding, the horses are always born black, fade to gray, and turn a distinctive white as adults. The horses pranced to classical music while above huge, lavish chandeliers hung. A seat in the front row overlooking the stallions was magnificent. The horses begin training at 3-5 years. The riders begin training at 16-18 years old and complete their training in 15 years. A café connected to the riding school area provided selections of coffees, apple strudel and other baked delicacies. 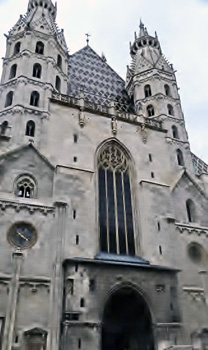 Belvedere Palace is two palaces, the Upper and the Lower. Here is where the Belvedere Museum is housed. It contains art from the 19thand 20th Century Austrian artists. Located inside the Osterreichische Gallery is a replica of the famous “The Kiss” which is a self-portrait of Gustoff Klimt. Adorned in the Baroque style, the property has decorated tiered fountains, sculptures, wrought iron gates and an expansive decorative garden.

St. Stephen’s stands in the center square towering over the city. It is a Gothic Cathedral in an ornate Gothic/Baroque style. The church is extremely ornate with a high altar, pulpit, organ and massive organ pipes. Frescoes and sculptures cover every crevice of the cathedral. Side altars depicting saints surround the nave. Towering spires rising above the city of Vienna, it is a masterpiece of architecture and a sightseeing symbol of Vienna. In front, is a large gathering square with side streets of shops, street musicians and cafes in every direction. 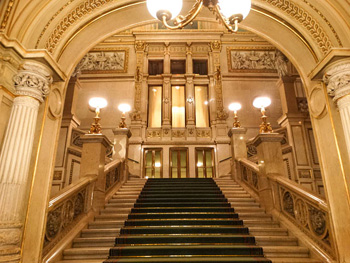 The Vienna State Opera is the World’s Greatest Opera House. Entering the front doors is a grand staircase of marble, chandeliered lobby, shimmering gold statues and lush carpeting. New Operas are presented nightly. The opera house, built in the 1860’s by Emperor Franz Joseph was inaugurated in 1869 with a performance of Mozart’s ‘Don Juan’. In 1945, the opera house was bombed. All that remained was the main façade, the grand staircase, the main lobby, attached veranda and the Tea Salon. In 1955, the opera reopened with the performance of Beethoven’s ‘Fidelio’. This opera house is the pride of Vienna. Concerts and classical music abound in the city. I was fortunate to have a private, early morning tour with a small group. The interior of the opera is opulent in size, seating 2200 attendees on the floor, selective boxes, and dignitary balcony seating. Standing by the orchestra pit one could imagine conducting the orchestra to a famous Mozart, Beethoven or Strauss performance. The stage, the size of the opera house itself was in the process of preparing for the evening performance. Although the stage is huge, costumes and scenery are stored in a nearby building until morning transfer to the stage. Work with the stage crew continues twenty-four hours a day. The luxurious intermission rooms for dignitaries were immense with gilded and architectural ceilings with frescoes. Mirrors adorned the walls for ladies to admire their luxurious gowns. Every box also had a small intermission area with beverages. Walking throughout the streets of Vienna, music can be heard from concert venues, churches, shopping areas and festivals held during the season. 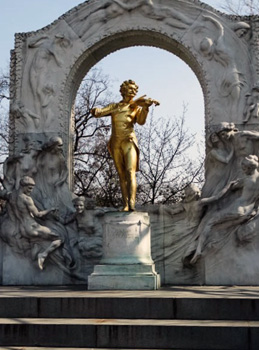 The Kursalon is an opulent Renaissance style icon concert hall. The stirring music of Johann Strauss and Wolfgang Mozart is performed in Lanner Hall for visitors to celebrate Viennese music with vocalists, ballet and concert orchestra. Outside, in Vienna’s City Park, is one of the most photographed monuments in Vienna, The gold statue of “The Waltz King”…Johann Strauss. In 1921, as the ‘Blue Danube Waltz’ played, Edmund Hellmer’s statue was unveiled. Strauss’s waltzes kept the 300 ballroom floors around Vienna spinning with Viennese Waltzes during the 19th Century. Today, Balls continue to be held in the ballrooms and palaces. Dance lessons are a requirement to properly dance the Viennese waltz. During the ‘season’, couples elegantly dress in ball gowns and tuxedos, to participate in the Grand Waltz Balls or the Debutante Balls. During the summer, evening music performances reminisce the music of Strauss, Schubert, Beethoven, Haydn, Liszt and Mozart.

In front of the Parliament Building is the Athena Statue. Within the Parliament are committee rooms, libraries, dining rooms, bars and a gymnasium. The Town Hall in front is where the well-known Christmas Market is held yearly. 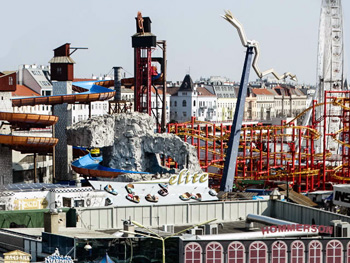 The Hausdermisik, the Music House, located in the old city center has an interactive music keyboard stairway and other musical hands-on experiences. The five upper floors feature all the composers who lived, composed and performed in the Vienna Concert Halls and Opera House.

Vienna has many green spaces. The Prater was designed as a large space for the Viennese people to enjoy the outdoors. Today it is an amusement park with enclosed cabins which rotate like a ferris wheel. Fabulous pictures of the city can be taken on this slowly moving ride.

On nearly every corner is a pub or café with locals and visitors. During the day and evening, they linger and enjoy conversations and an evening of drinking bier. Nearby, clustered around the towns, are the wine gardens. A visit to Heiligenstadt is the Beethovenhaus Wine Garden where Beethoven lived and began working on his Ninth Symphony. 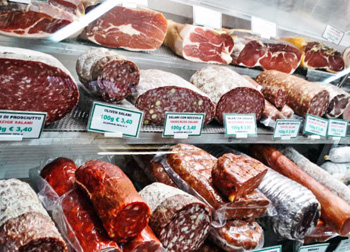 The Naschmarkt, Vienna’s Old World Market of 120 stalls immerses you in the flavors and colors of Vienna. Here you will find vendors selling fruit, vegetables, meat, fish, olives, bread, oils, wine and handmade products. Small indoor and outdoor restaurants line the corridors including a beer garden. This is an International market of food and spices from throughout the world. Chefs buy produce from the market to prepare meals in upscale city restaurants. Chatting with the vendors and sampling sweet crepes and Austrian cheeses from alpine dairies makes for an enjoyable, delectable afternoon.

Charles’ Church was built in the early 1770’s. Art, teaching, and music are represented among the hundreds of frescoes, main altar, side altars and organ pipes. Musical Masterpieces are performed here frequently.

♦ Specific advice for visiting Vienna is to contact the Vienna Chamber of Commerce. Centrally located you can receive advice from highly qualified, multi-lingual individuals. The Commerce provides brochures on all cultural sights, performances, museums, churches and any other interests you may have. Address: Albertinaplatz, 1010 Wien, Austria Phone:+43 1 24555
♦ Purchase a 48 or 72 hour Vienna Tourist Pass. The pass allows for unlimited use of trams and the underground for transportation. The pass also provides for tourist site discounts.
♦ Explore the city while relaxing in a horse drawn carriage.
♦ The Hop-On, Hop-Off Bus Tour is a double-decker bus with panoramic views.
♦ See Vienna by bike, small tours, private tours or by boat on the Danube. 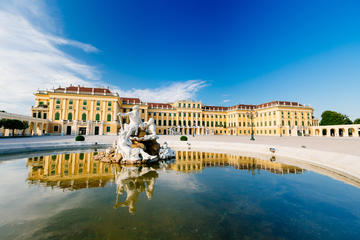 About the author:
Mary Ann Olson is a published journalist, travel writer and musician. She is a member of the Professional Writers’ Alliance and the International Travel Writer and Photographers Association. Mary Ann provides great insight into the culture, music and arts in the countries visited. Wine and Food are a passion and a focus of her travel writing. She shares her travels at I Write About Travel.com.