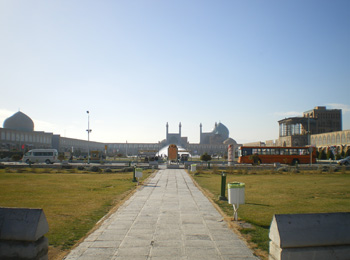 Isfahan nesf-e-Jahan: Isfahan is half the world. I’d had this old saying ringing in my head for months. Ever since I’d first seen pictures of Isfahan’s magnificent mosques of blue and gold, I felt it was one of those places that I just had to go to, a goal in itself with no need for explanation and reasoning. There are many places in Iran that call to the historically minded, or to the curious. Isfahan, being one of the ancient capitals of Iran, has a natural appeal to historians but more than that it hosts one of the most beautiful collections of buildings in the world. 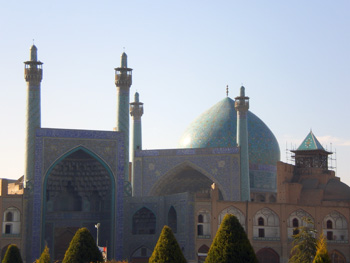 It was early in the morning when I first walked into Nagh-e-Jahan square. It was a national holiday so people from all over the country had flocked to Isfahan. For me this meant the only available space in a hotel was little more than the floor of a converted underground storage room. Thoughts of such cramped accommodation made me happy to now be standing in one of the world’s largest squares. A huge open space, enclosed by covered arcades on each side is home to three of the high points of Persian, and world, architecture, the Imam(Shah) and Shekh Lotfollah mosques and the Ali Qapu palace.

Unlike most urban spaces which can feel crowded and busy, the panels of grass under foot and an open, cloudless, sky above the Nagh-e-Jahan were relaxing. So to begin I simply sat down and took in the glories of Persian architecture that surrounded me. There is of course a reason why so many grand mosques, palaces and markets are clustered in one place. At the end of the sixteenth century Shah Abbas wanted to make this spot the centre of his power base. The Shah moved his capital to Isfahan, roughly in the centre of modern Iran, and began a huge building programme to make the city a worthy capital. The centrepiece of this programme, the Nagh-e-Jahan square, is then a monument to centralised power. But with that power having fortunately faded long ago, what’s left today is a space of remarkable beauty. 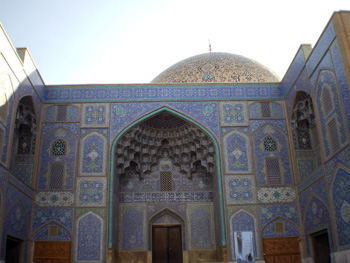 Getting up off the grass I walked toward the largest of Nagh-e-Jahan’s monuments, the Imam(Shah) mosque. Every inch of the sizeable structure is covered in blue and turquoise tiles, a speciality of Persian architecture. The mosque’s massive but intricately detailed gateway interrupts the plain brickwork of the surrounding arcades. The central arch alone climbs up to 27m with the two flanking minarets continuing further to reach 42m. Inscriptions in white Arabic script against a deep blue background frame central entrance. The rest of the space is filled with floral and geometric patterns in a mix of lighter colours. The level of detail is such that no corner, edge, or spot is left unadorned. This level of detail continues inside with over 400,000 painted tiles covering the arcades, halls and gateways of this extensive mosque complex. If the mosques of Nagh-e-Jahan square are the crowning glories of the Shah’s building programme then the domes are certainly the glittering jewels. 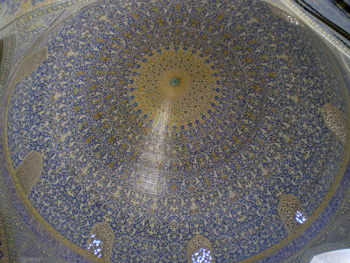 The architects of the Safavid period (AD1501-1736) covered both the interior and the exterior of their domes in coloured tiles with colourful and impressive results. The Imam mosque is topped by an unblemished turquoise dome which fades paler and paler as the sun hits it. On the inside, yellow and cream floral patterns grow in circles against the blue background until this mass of individual details culminates in one central point at the top of the dome. Starring up into this pattern I could start to see that this wasn’t all about making something simply beautiful, these thousands of tiles were arranged to make a point. That the decorating pattern flows up, or flows down, from one central point was not just an aesthetic choice, it symbolises the climb up to heaven. The decoration of the mosque, like all art, is there to help people think of things beyond themselves.

More remarkable still was the next building I walked into after exiting the Imam mosque. Again I entered through a brightly pattern gateway with a large dome sitting low just behind it. This time the exterior of the dome was based on yellow rather than blue. Since the Shekh Lotfollah mosque was built to be the private mosque of the Shahs, whereas the Imam mosque was for the public, the decoration is even more elaborate and rich. Unusually this building stands alone without minarets and the treasures within would have been unknown to all but a select few for centuries. Now, thankfully, commoners such as myself and the dozens of holidaying Iranians around me are freely allowed to walk the corridors of the Shah’s private jewel. 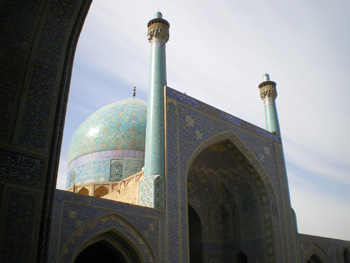 Perhaps not surprisingly there was more of a preference here for yellows and golds which are lit up by the sunlight flowing in through a series of windows. It says a lot that scholarly opinion suggests the Shekh Lotfollah is on a higher artistic level than even the Imam mosque. More effort and expense were put into this building and, while it is the smaller of the two, it is more embellished than its popular neighbour. The religious ideas motivating the decorations are again visible as I look up at the roof of the prayer hall. Circular patterns ascend in ordered rows to culminate at the top of the dome to inspire the visitor to contemplate the one centre.

These two buildings are certainly not lone diamonds, Isfahan probably has one of the best collections of architecture from the 16th-17th centuries anywhere in the world. Straight across from the Shekh Lotfollah mosque is the Ali Qapu palace. Also constructed on the orders of Shah Abbas, its large balcony hangs over one side of Nagh-e-Jahan square. Eighteen slender wooden columns hold up the finely painted balcony roof and from here I naturally got the best view of the city. Back down on the ground, Isfahan’s other major palace, the Chehel Sotoun, has a similar painted wooden pavilion set amidst a park. Both palaces are highly decorated inside with the walls of the Chehel Sotoun bearing a number of large frescos depicting the shahs and the court. 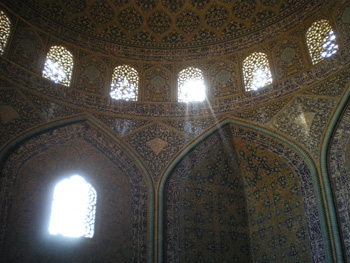 The building programme of Shah Abbas also left a significant legacy spanning the river Zayendah. Numerous monumental bridges cross the wide stretch of water at Isfahan, some with foundations going back over a thousand years, but the longest is the Si-o-seh pol. During the day it is a long flat place to stroll along and combinations well with the grassy banks of the river to become an ideal place to rest in the afternoon. Covered niches line the sides of the bridge giving people dozens of semi-hidden spots to sit quietly looking out over the river. With evening the promenading crowds increase as do the numbers of river birds that flock over head.

It takes a good few days to wonder around the city looking for the various mosques, cathedrals, bridges and palaces that bring people to Isfahan. When many of these buildings were fresh and new in the 17th century it was believed that Isfahan was one of the world’s most beautiful cities. That claim still holds true centuries later.

Procedures to get a visa to visit Iran change from time to time so check with an embassy in your country first. A pre-approval number is often needed which can be arranged through a number of travel agencies. The process takes time but, depending on circumstances, can be easy enough.

About the author:
Neil Middleton is an occasional writer and archaeologist with an eye on history. He has traveled to a number of places around Europe, the Middle East and Asia and has lived in a variety of European countries.