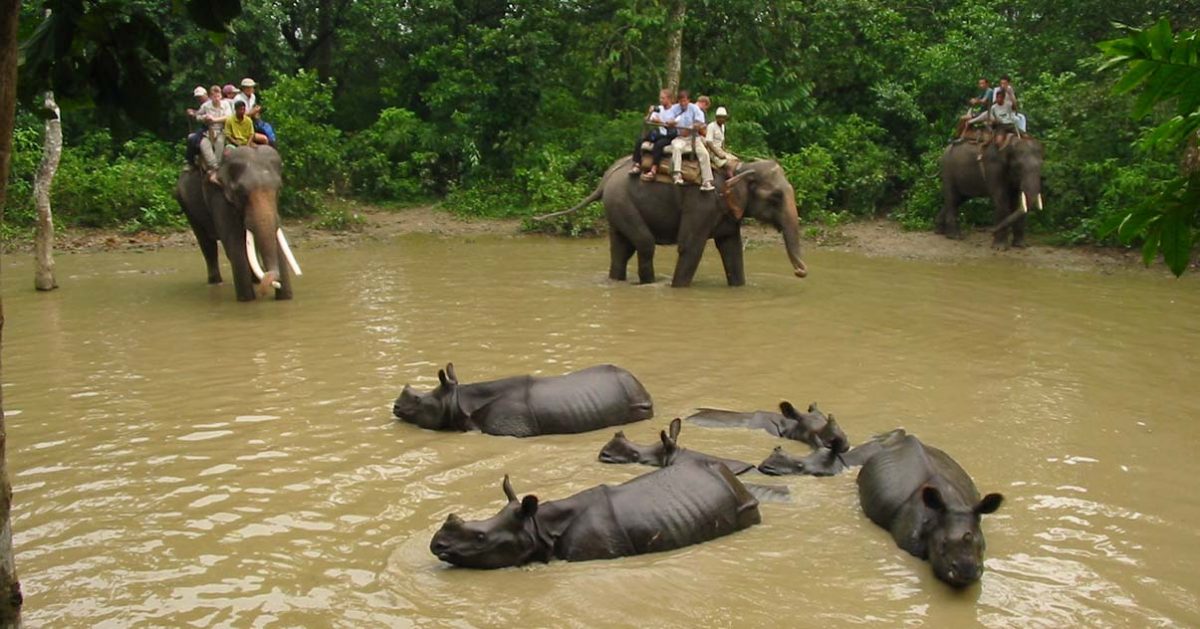 Chitwan, a hunting resort for royal families in the 1800s, was designated a UNESCO World Heritage Site in 1984. Covering 360 sq. miles in south west Nepal, the National Park is considered one of the finest wildlife sanctuaries in Asia.

My travel package included a return bus ticket, 3 nights accommodation, meals, a jeep ride and other daily activities. Despite being only 90 miles from Kathmandu, the bus trip takes 6 – 7 hours but could take more than 12.

Waiting to board, I shouldn’t have looked at the tires. They were bald, but this was Nepal. Had I seen any vehicles with tread? I tried not to think of the tires as our driver pushed his way into typical morning chaos. Through belching exhaust, constant honking and yelling, we jockeyed with other buses, (piled high with luggage) and open back trucks, (jammed with people or crates of pigs and chickens). Overloaded cars, taxis, motorcycles and bicycles, darted in and out, barely slowing for meandering cows.

Past Thamel, the entertainment center of Nepal, the road to Chitwan narrowed, was winding and bumpy with pot holes and broken pavement. Sensing I was in for quite a ride, I swallowed a couple of Advil. 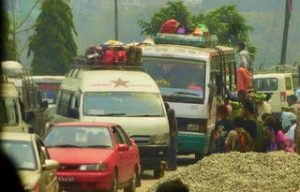 Supposedly, a two lane road, but in Nepali style, there were no painted lines. When there was a momentary break in oncoming traffic, drivers, (including ours), headed to the empty spot, sharply cutting back only when a head-on was imminent. I decided to stop looking out the front of the bus.

Watching through the side window, the scenery was spectacular: rivers, forests, lush green fields, planted terraces, shacks, farmers, herders and their goats. But when the oncoming lane was plugged with traffic, buses and heavily loaded trucks passed on the right. Passing on the right with its loose gravel and steep cliffs was suicidal. Glancing down into ravines was like looking at a twisted metal cemetery.

Occasionally we moved along fairly quickly. When there was a traffic jam, hordes of villagers, from who knows where, arrived with loaded baskets of bananas and trinkets. They banged on bus windows, hoping for a sale.

Arriving in Chitwan eight hours later, was a relief. The lodge, surrounded by rice paddies and trees, looked quiet and peaceful. Checking in, I was told to be ready at 8 a.m. the next morning for a jeep ride. “No thank you,” I said. I was very sore after our bumpy ride from Kathmandu. “I’m happy to stay here tomorrow.” The young man seemed determined to give me a replacement activity.

“How long a walk would you like?” he asked. I suggested leaving about 10, taking a lunch and walking about four hours. He said that would work. 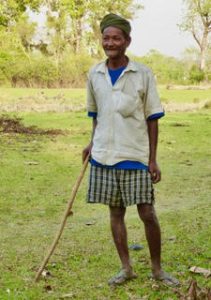 After a good night’s sleep and delicious breakfast, my guide appeared. I confirmed we would be doing a four hour walk. He nodded yes, but said, he had to do a pickup. I thought he meant “pick up other tourists” but no, he meant pick up another guide. The second guide didn’t speak English. I was told to walk between them. A sobering thought: two men, me, no whistle or phone. What kind of walk was this?

They both carried a large stick. When I asked where my stick was the English speaking guide said I didn’t need one: they would look after me as we stalked rhinos. Stalk rhinos? Really? He went on to say rhinos had poor eyesight but a superior sense of smell, might look slow and heavy but could charge at 30 – 40 mph. My instructions, should this happen? Climb a tree or run zig-zag. I thought he was being dramatic. He wasn’t. 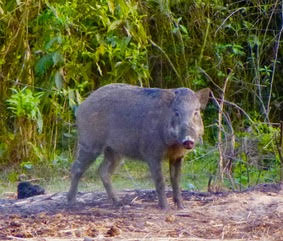 It was cool in the jungle. It seemed to throb with unseen excitement. The guide was very knowledgeable, naming birds and identifying unusual bugs and interesting sounds. There were monkeys, ant eaters, ant hills, a wild boar, (thankfully uninterested in us). This was the type of walk I had expected.

After about an hour of fairly easy walking, I saw what looked like a solid brown fence about four feet high, five or six feet long. It was a giant pile of poop. As we carefully walked past it, the guide explained rhinos’ make communal latrines to mark their territory. He said, “one rhino poops about 400 pounds a day.” Rhinos? I had forgotten we were supposed to be stalking them.

Suddenly both guides put a finger to their lips and dropped onto their haunches. I hadn’t seen or heard anything but dropped down too. My heart was hammering. What on earth was I doing? One guide motioned me to creep forward. At the same time the other guide mouthed “Run!”

At the age of seventy there was no way I could climb a tree, so the second guide and I zig-zagged, between the trees, until motioned back to where the first guide still crouched. We slowly and quietly crept forward. 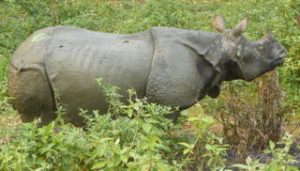 As I peered through trees and tall grass, I saw an open area. A one horned rhino, the size of a Volkswagen bus and dressed in heavy armour, was moving slowing, munching vegetation. We had only a couple of minutes to watch before he stopped moving and raised his head. He had caught our scent. We got out of there quickly.

Was the day’s excitement over? No! We climbed a steep set of steps to a platform where we would be safe to eat lunch. The view was magnificent. We could hear the calls of the jungle and see the river. Far away on a high bank two men, (with an elephant), were cutting long grasses. The elephant was their transport vehicle.

The guide told me more about one-horned rhinos. In the last century poachers killed them for their horns. Only 200 remained world wild but with protection, numbers were increasing.

Finishing our late lunch, I told the guide I wanted to head back to the lodge. He nodded, “yes.”

We were walking in a sandy belt bordered by dark forest and thick undergrowth. The area was open with no protection from the burning sun. I was thinking I had very little water left when the front guide stopped. Bending down, he said, “fresh tracks, a tiger, likely male by the size of the print, was here not long ago”.

The prints were huge, as big as the width of my outstretched fingers and thumb. The guides were very excited. The English speaking one said, “There used to be many tigers in Chitwan but poachers drastically reduced their numbers. Male tigers can be up to 11 feet in length, 3 1/2-feet to their shoulder and can weigh up to 500 pounds. They prefer to stay hidden and far away from noisy jeeps so few tourists ever see them”. He added that neither he nor the other guide had seen one in the last eighteen months. “But we might be lucky today,” he said.

I didn’t want to be lucky. I wanted to get the hell out of there. I was told, “Don’t speak, walk slowly, listen carefully.” If we found where the tiger was, (or more likely, he found us), I should make eye contact and slowly back away. “You must not run!” he told me sternly. 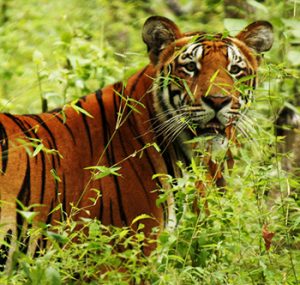 We walked slowly and carefully for another 20 – 30 minutes. The front guide stopped suddenly, nodding his head to the left. Both guides, raising their sticks, moved in close on either side of me. Having heard and seen nothing, I followed their gaze 25 or 30 feet ahead. Standing perfectly still, almost the same height as me, I held my breath, as shining yellowish eyes locked on mine. Mostly hidden in the trees and undergrowth, I had only a few seconds to make out some white marks and black streaks around an orangey brown face and I could glimpse a little of the colour and outline of his body.

“Eye contact, back away slowly,” the guide muttered. As we backed away the guides, yelling furiously, banged their sticks on the ground. The tiger kept staring. My instinct was to run. “I must not, I must not,” I said to myself.

We kept moving backward for what seemed ages but was likely only a few minutes. I saw a slight movement of the tall grass. The big cat disappeared into the thick forest. We continued walking backwards until the guide, sweat pouring down his face, said “He’s gone. What a day!”

It had been an exhilarating but scary day. The only other humans we had seen were the two men with their elephant. Very naïve and unprepared, I was happy to be safe. The four hour peaceful walk, I had expected, had turned into an eight-hour adventure. My feet were sore, I was desperate for a toilet.

How to get to Chitwan National Park from Kathmandu

Bus, rent a car or fly: When I went to Chitwan the road was terrible. The bus could take up to 12 hours. Today the road has been improved and you can reach Chitwan from Kathmandu in 5 – 6 hours.

Accommodation: Chitwan has many places to stay ranging in price from reasonable to expensive. I stayed at Green Mansions Jungle Resort which I would recommend. Steps from the Rapt River, the grounds were beautifully groomed, rooms lovely and clean, food delicious, staff friendly and helpful.

The prices to bus and stay at Green Mansions Jungle Resort have gone up considerably since I booked an all-inclusive 3- night package in 2014 for US$327.00. I booked while in Nepal so that might account for some of the price difference. 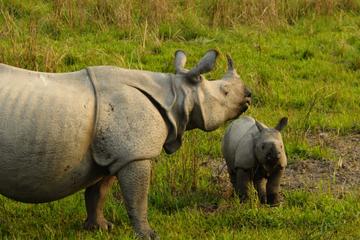 Renee caught by the travel bug when she was twenty-one and spent four months in Europe. With little money, walking a lot, carrying her suitcase, (no wheels in 1960), her shoes were re-soled twice. Later, living in Switzerland for three years, she further explored Europe by Volkswagen bus. An RN / Lactation Consultant, she has worked in Malaysia, Thailand, Philippines and the Emirates. In 2014 she volunteered at a school for Himalayan Nepali children. Weekends were spent exploring Nepal. She continues to travel for pleasure; her camera always near-by. 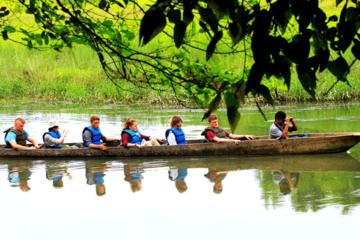