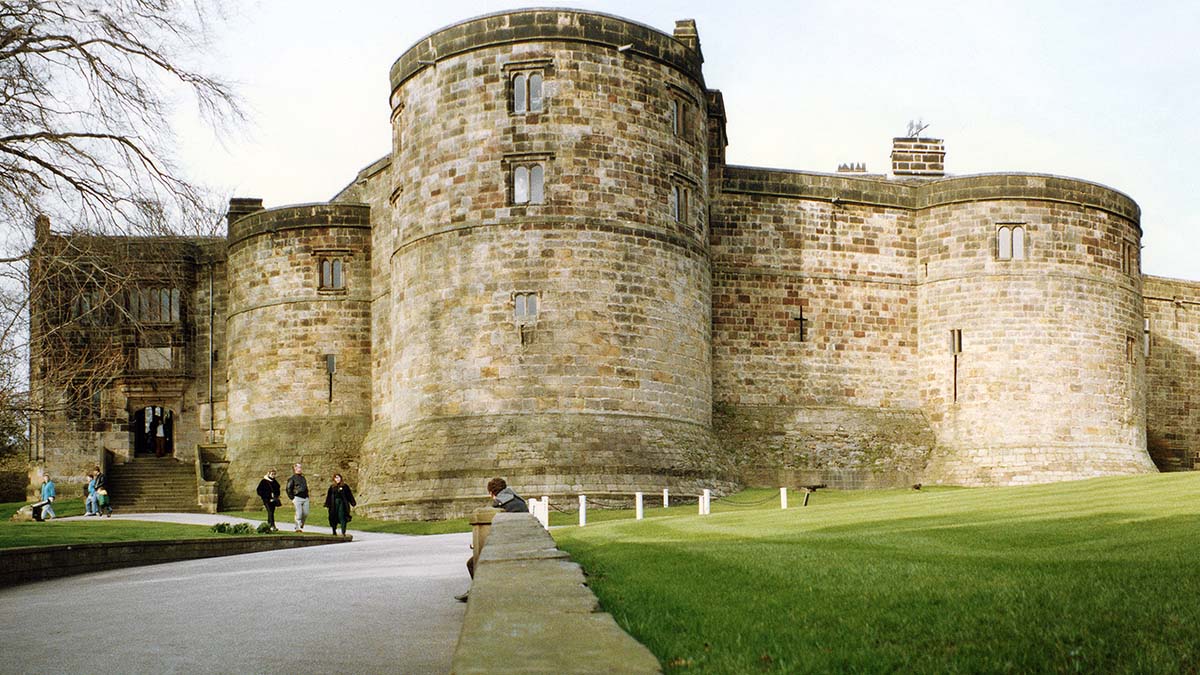 Yorkshire literature is best known for the Brontes of Haworth, in the west of England’s largest county. However, the Ilkley Literature Festival has become an important event in the modern literary calendar, attracting famous writers from Britain and abroad. Its north Yorkshire location also provides an ideal gateway to the Yorkshire Dales National Park.

The Ilkley Literature Festival has been showcasing local and international writing since 1973, when it was opened by the poet W.H. Auden. It was biennial at first, before becoming annual in 1988.

Visiting guests have included Maya Angelou, Margaret Atwood and Benjamin Zephaniah, and it also showcases local creative talent, such as Ted Hughes and Simon Armitage. In 2012, as part of the London Olympics celebration, six of Armitage’s poems were carved into rocks to create a forty-seven miles long Stanza Stones poetry trail from Ilkley to Marsden in south Yorkshire.

This October’s festival features a mixture of celebrity writers, such as Brian Blessed and Simon Schama, and special themes. The latter includes the history of the reader and self-help books; Brontes history and legacy, and the contribution of Black and Asian soldiers in last century’s world wars. 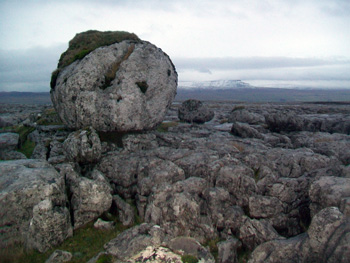 Ilkley is a picturesque town in the Wharfe Valley, with the Wharfe river on its eastern side, and a rock plateau rising above the western. The latter is known as Ilkley Moor, and is the subject of Yorkshire’s unofficial anthem, On Ilkla Moor Baht ‘at. The song is about a man courting a woman while questioning her decision to walk on the moor without a hat – bar hat. The first published version of the song dates from 1916, so it is a century old this year; although it is thought to have been sung as a folk song for a couple of generations before being written down. The Cow and Calf rocks on the southern edge of the moor are popular landmarks, as well as providing small sheer cliff-faces to climb.

Archaeological evidence suggests Ilkley has been home to human settlement for at least 4000 years. A stone circle known as the Twelve Apostles on Ilkley Moor dates from the Neolithic Age. Ilkley’s moor forms part of an extended plateau between Wharfedale and Airedale called Rombalds Moor. Rombalds has the second highest amount of stone-carved artwork in Europe.

Britons, now sometimes called Celts; with the latter word derived from the Greek word Keltoi, meaning barbarians, used by the Roman invaders to describe the inhabitants they found in the most northern corner of their empire; developed an intricate artistic culture in the Bronze and Iron ages.

That era was brought to an end about 2000 years ago, when a large local force known as the Brigantes fought with the Romans in the area. The Brigantes are thought to have been a conglomeration of smaller tribes, and the unified organisation of the Romans meant they subdued the local warriors, although there were constant rebellions against the occupiers. There is evidence of a Roman fort in Ilkley dated to about AD 80, although the town has been built around it. Ilkley became a popular spa town in the nineteenth century, and Victorian architecture still provides a window into that world.

Germanic tribes such as the Angles and Saxons entered after the Roman exit in the fifth century, forming an Anglo-Saxon identity mostly remembered in writing through the memoirs of monks such as the Venerable Bede and legendary sagas such as Beowulf. The Vikings arrived in the ninth century, and made nearby York the capital of their territory. The common suffix dale derives from the Old English word dæl, and has cognates in the Norse word for valley: dal.

About ten miles north-west from Ilkley is the town of Skipton. It features a well-preserved medieval castle with a fascinating history. It was the last Royalist stronghold in the north during the English Civil War, under the command of Sir John Mallory. Parliamentarians laid siege to it for three years between 1643-1645. 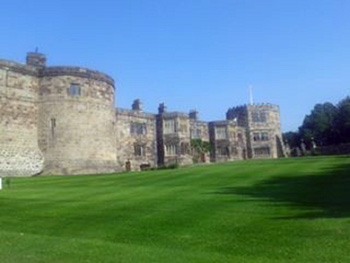 Skipton Castle was built in 1090 by Normans who had recently defeated Anglo-Saxon King Harold at the Battle of Hastings in 1066. Hastings is in the south of England, and one of the reasons for Harold’s defeat is that many in his army had only just returned from defeating a Viking invasion led by Harald Hardrada and Tostig in the east Yorkshire Battle of Stamford Bridge.

Ironically, the Normans themselves were descended from Vikings who raided the north coast of France in the previous century, before settling and assimilating: the word Norman deriving from Norseman.

Robert de Romille was the first baron of the castle, and his descendants lived there until the line died out. King Edward II then installed Robert Clifford as the Lord of the castle and Guardian of the surrounding Craven district in 1310. Between the castle’s outer walls entrance and the main building there is a chapel dating from that century. The Clifford family lived at the castle until 1670. 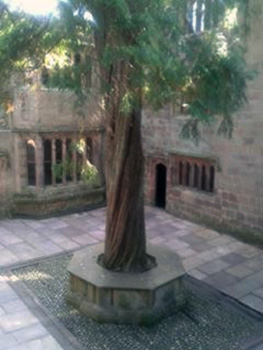 The last Clifford, Lady Anne, planted the yew tree that still stands in the Tudor-era Conduit courtyard. It is a fine sight on a sunny summer day, with its greenery rising high enough atop a twisting trunk to feel the warmth of sky above the castle walls.

Although the castle has six drum towers, and well-preserved living quarters, it can look quite small from its front, as the entrance is on street level. However, while walking behind the castle in Eller beck to the impressive Skipton Woods, the castle looks dauntingly high and mighty. It is easier to imagine its Civil War impregnability looking up from the walkway over the Springs Branch canal.

This Leeds-Liverpool canal tributary, which is also called the Thanet Canal, was used to transport limestone from local quarries. It was opened along with the main canal in 1773, and extended in 1794. The Skipton to Bingley section of the Leeds-Liverpool canal was the first to be opened, as it was flat enough to not need locks.

The canal helped make Skipton a boom town during the Industrial Revolution, with many mills starting up in the nineteenth century. Cotton, iron, wool and silk were some of the products produced locally and shipped globally from Liverpool. 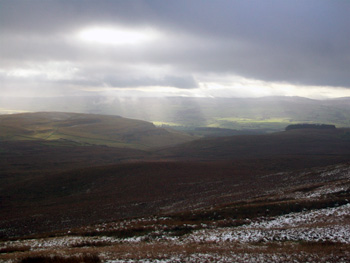 Skipton is the local gateway to the Yorkshire Dales National Park, with buses weaving out from the town along country lanes to picturesque stone-built villages. A few miles from Skipton is Malham. The small village is famous for its 260-feet high limestone cove and paving, which was the setting for a scene in Harry Potter and The Deathly Hallows Part 1.

While Leeds, Bradford, Otley, Ilkley and Skipton all have nice nature within and around them, once you reach Malham, Kettlewell or Buckden travelling north you know that you are well and truly within the Yorkshire countryside.

A protected Dales park was created in 1954. Only a few villages and houses interrupt nature for miles around, and it is difficult to remember that two of the country’s largest cities are only about twenty-five miles south.

The Three Peaks fell-running race has been taking place each spring since the park opened, with this year’s event being the sixty-second. The three 2000-feet-plus Pennines peaks are Ingleborough, Whernside and Pen-y-ghent.

Between the peaks is the Ribblehead viaduct, with the twenty-four arches providing a fine foreground for Whernside photos. Whernside is the highest peak in Yorkshire, and also provides the county border with Cumbria. The viaduct was built between 1870-1875, with ten per-cent of the 1000 workers dying during that time. The Ribble valley became a temporary home for shanty towns full of workers and their families, inspiring an eight-part television series Jericho. The towns’ names often derived from the bible and Crimean War (1853-1856) victories.

Cumbria seems to have influenced the name Pen-y-Ghent, as Pen means Head in Cumbric, as it does in Welsh. The mountain’s head faces south, and its higher part’s extension above the long body, and out from its lower part, before it levels off at its foot like the outstretched feet of a lion reminds me of the Egyptian Sphinx. 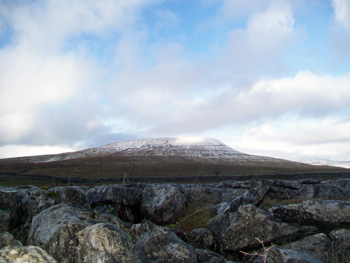 There is evidence of 4000-year-old buildings on Ingleborough, and the second part of its name derives from burh, an Old English word for a fortified place. It has been assumed for years that it was a hillfort village, but an information board on one of its paths advises that a newer theory argues it could have been a special location for spiritual occasions, like Stonehenge in the south.

Renowned hiker and writer Alfred Wainwright considered the hike around Ingleborough from Clapham to Horton-in-Ribblesdale his favourite in the Yorkshire Dales. The last time I looked in that direction, crepuscular rays fell from thick clouds over the valley in the distance, while snow brightened the foreground fields. Limestone pavements decorate large areas of greenery, with lonely hawthorn and rowan trees, or big boulders, sometimes ornamenting them.

Descending the peaks at the end of daylight, as house and farm lights flicker on, it is not difficult to imagine the Neolithic people returning from a special occasion high above, such as a midwinter festival, looking forward to a hot meal and cup of mead by a warm natural fire.

There are regular buses and trains from Leeds and Bradford to Ilkley and Skipton, and local buses from there into the Dales. A good place to start planning your trip is the West Yorkshire Metro website