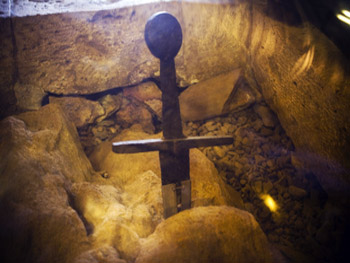 Unlike Arthur’s mighty weapon, The Italian version of Excalibur is on display for all to see, firmly wedged up to its hilt, in a smooth stone in the tiny round chapel of Montesiepi in Southern Tuscany.

Legend states that on Christmas Day 1180, a cruel arrogant knight named Galgano Guidotti had a vision of the Archangel Michael who urged him to renounce his evil ways. Galgano followed the angel to the top of Monte Siepi. Galgano claimed it would be easier to split rocks with a sword than give up his worldly pleasures. Fully expecting his blade to snap, he thrust his rock at the rock and was amazed when it penetrated the stone, leaving the hilt exposed. Galgano was immediately converted, became a hermit and befriended the wild animals in the area. He apparently performed 19 miracles and was eventually canonized. 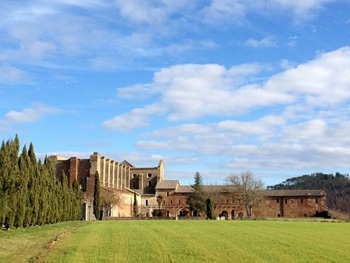 Cistercian monks built the round chapel of Montesiepi around the “cross” in the stone. The domed roof is built of concentric circles of alternating white stone and terracotta and frescos by Sienese painter Ambrogio Lorenzetti decorate the walls. It has been claimed that the chapel itself is a “book in stone” hiding the location of The Holy Grail.

The sanctuary features two minuscule side chapels. One houses mummified arms, whose origins are surrounded in legend. One version of the story says they are the arms of an assassin sent by the Devil to kill San Galgano, whose wolves protected him and “gnawed the bones” of the Devil’s servant. Other stories say that anyone who tried to remove the sword from the stone had their arms ripped off. The second chapel originally contained San Galgano’s head, which supposedly continued to grow blond curls for years after the saint’s death. The saint’s head can now be found in the small church in Chiusdino, where he was born. 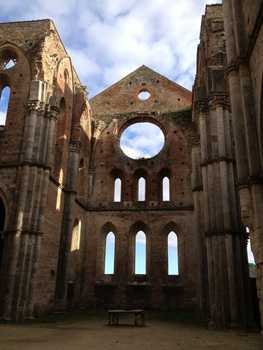 Italian scholars claim that Galgano’s Sword in The Stone precedes Arthurian legends and the original story may well be Italian. The first stories of King Arthur appear decades after Galgano’s canonization, in a poem by Burgundian poet Robert de Bron. It has been suggested tales of The Round Table may have been inspired by the round chapel and the name Galgano was altered to become Gawain. Claims that the Italian sword was a fake, made to echo Celtic legends of King Arthur, have been recently disproved. The skeletal arms in the chapel have been carbon-dated to the 12th Century, and metal dating research in 2001, by the University of Siena, indicates the Italian sword has medieval origins. Could it be that the stories of King Arthur are really based on Italian history?

The crush of visitors flocking to the chapel of Montesiepi meant the Cistercians were authorized to build an abbey named after the Saint in the valley below. This masterpiece of Cistercian sobriety, consecrated in 1288, is one of the most beautiful Gothic buildings in Italy. Eventually assigned to a group of absentee abbots of noble lineage, a certain Giovanni Andrea Vitelli removed and sold the leading of the abbey in 1548. The roof of the abbey subsequently collapsed. Today, only the walls remain and the roof is open to the incandescent Tuscan sky. The imposing abbey of San Galgano, surrounded by fields of sunflowers and rows of cypress trees, is a magnificent sight, visible for miles around. 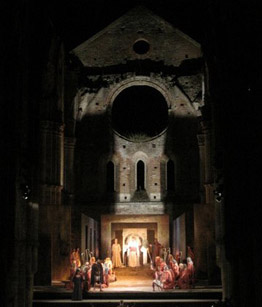 Every summer the company Opera Festival Firenze holds classical music concerts and operas in this splendid setting. Performed annually, a spine-tingling rendition of “Carmina Burana “ under the Tuscan stars, is unforgettable. Other favourites include Vivaldi’s ”Four Seasons, “Swan Lake” and “La Traviata.”

Just thirty kilometres from Siena, the abbey is immersed in history and mystery and stunning in all seasons. An ideal spot for a romantic picnic, quiet contemplation and a gentle stroll through the incredible countryside, you can even enjoy a fine glass of Chianti at the little wine bar at the top of the hill near the chapel, San Galgano really should not be missed. 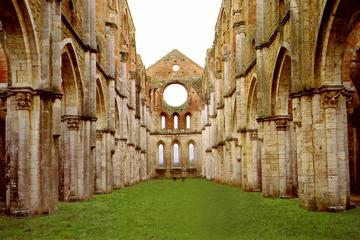 Full-Day Private Tour to San Galgano and Montalcino from Siena

About the author:
Sarah has been writing since she could hold a pencil. She is originally from near Liverpool in the Uk but has lived in the USA, Greece, the Czech Republic and Italy. She has been living in Pistoia, near Florence for 15 years, where she teaches English. She is passionate about poetry, literature, music and travel.