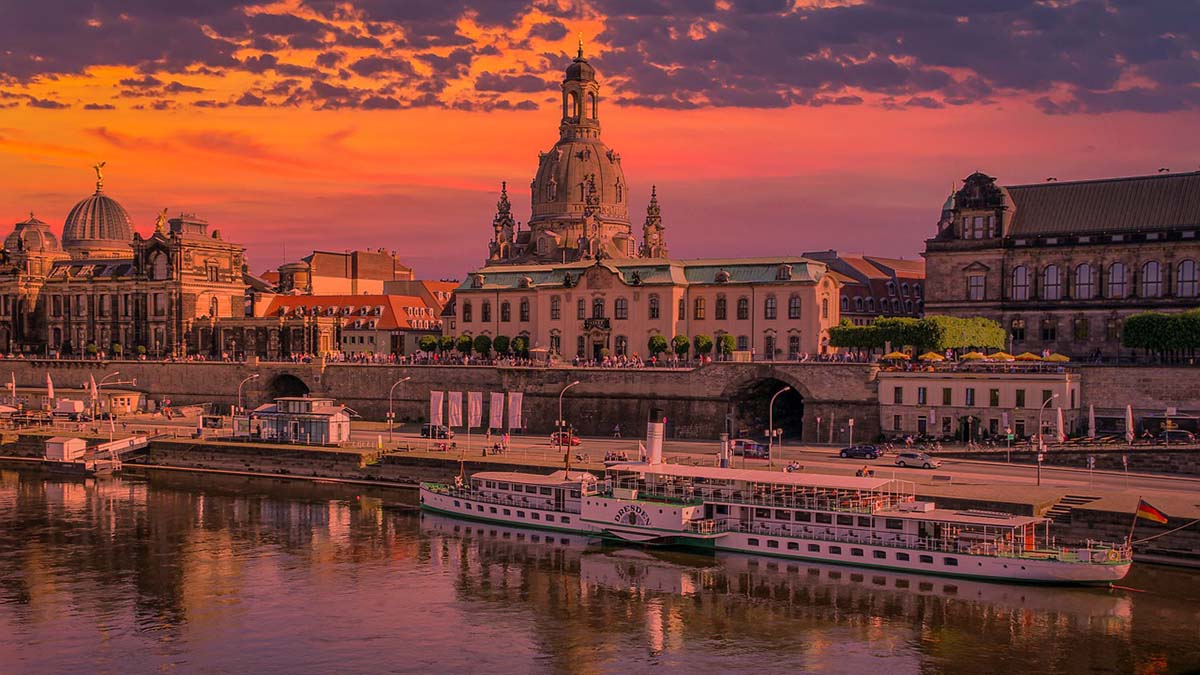 Rising from the Heap of World War II destruction in Dresden, Germany, are three magnificent churches. The World War II bombing by the Allies on February 13 and 14, 1945 is purported to have smashed the city of Dresden with some 650,000 incendiary bombs. Various estimates of those killed range between 25,000 and over 100,000 people. The subject of the Kurt Vonnegut novel Slaughterhouse-Five describes walking among the ruins as if walking on the moon. Recently, I visited three of these Dresden churches, survivors of the World War II destruction.

The Frauenkirche (Church of Our Lady) 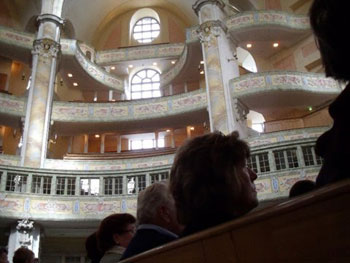 Augustus the Strong, the Prince Elector of Saxony and King of Poland, was jealous of great Catholic cathedrals, so he had this Lutheran house of worship built between 1726-1743 by George Bähr (mostly completed by 1736). Johann Sebastian Bach gave an organ recital there in 1736.

The incendiary firebombing of the city February 13-14, 1945 had created a temperature around the church of 1000 degrees Centigrade (1832 degrees Fahrenheit), which caused the church’s 6,000 tons of stone and die Steinerne Glocke or “Stone Bell” (the iconic skyline feature of the city) to collapse on February 15 after the sandstone pillars gave way. Ironically, this church had survived 100-plus Prussian cannonballs bouncing off of it during the Seven Years War of the middle 1700s. 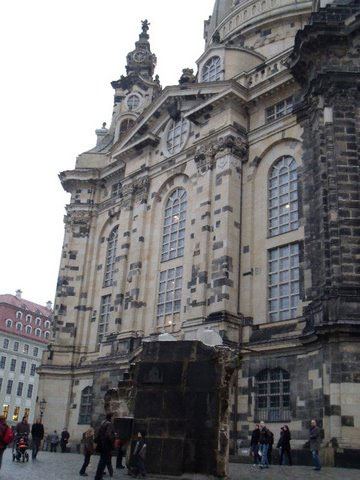 In 1982, the ruins became an area for protest gatherings against the Communist regime. But in January 1993, original plans from the 1720’s were used to reconstruct the church, using thousands of recovered stones which were put back in their original place (including ones darkened from the firebombing. This is why you see the exterior walls in checkered patterns). Photos and computer technology were used to reconstruct the church in as close of detail as possible, which took until 2005, costing 100 million Euros, 90 percent of that coming from global donations. The church is 92 meters high (about 302 feet) and you can take in a view from 85 meters (about 279 feet), according to the guided tour I took. You must climb some 220 steps to get up there. Near one of the Frauenkirche’s entrances are remains of the World War II destruction (that look like a sculpture) for people to ponder.

I took in a noontime devotions service that featured organ playing, but not before hearing Peal of the Peace Bell, which rang for a few minutes. The opulent Baroque style interior features luxury boxes on the second floor like a sports stadium.

The Hofkirche (Cathedral of the Holy Trinity) 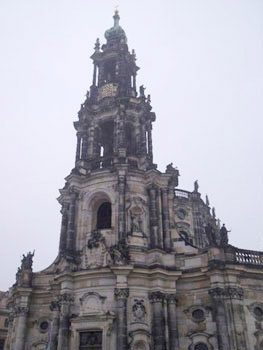 This Catholic church was built between 1739-1754 so August the Strong could become King of Poland, a Catholic country. It has the look of Roman Baroque style and is a stone’s throw from the River Elbe. The crypt contains the heart of August the Strong, too. The only aspect of the church building that was reconstructed from the ruins of World War II is the organ backdrop, containing a restored Sibermann organ that contains 3,000 pipes, in which I heard a beautiful Bach organ concerto playing during the noon hour. There are 78 figurines on the exterior of the church that were created by Lorenzo Mattielli.

The Memorial Chapel at the rear of the church honors those who died in the firebombing and is made of Meissen porcelain. It’s got a look, in my view, of a creepy interpretation of modernist art, but made me ponder the World War II destruction of Dresden, Germany nonetheless. It contains these dates: 30-1-33 (rise of Hitler) and 13-2-45 (the first night of firebombing).

The Kreuzkirche (Church of the Holy Cross) 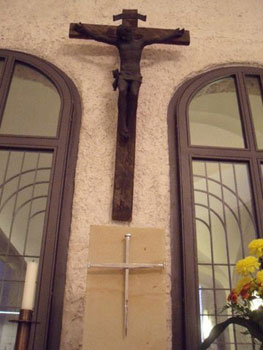 The church has been onsite since 1215, making it the city’s oldest church. It held the first Lutheran service in Dresden, Germany in 1539, and has been destroyed several times: by fire in 1491, 1699; by war in 1760 (Prussians); and much of it was destroyed in the February 13, 1945 bombing raid. I toured the venue that was rebuilt and reconsecrated February 13, 1955. Professor Anton Dietrich’s painting, called Golgotha, survived the World War II bombings and subsequent fires but lost its luster until it was restored in 2001. This church has the second largest peal bells in Germany weighing over 28 tons, according to one of the church’s English brochures. They are still in disrepair, according to the church attendant I spoke to there. But the church can hold 4,000-5,000 people currently, making it the largest house of worship in Dresden.

The church features the Charred Cross and the Coventry Cross of Nails, which came from the German destruction of a church in Coventry, England in November of 1940. This shows the gesture of peace between the two countries.

Author’s Note: I attended the German National Tourist Office’s 2009 “The Making of Christmas” press trip, in which I got to experience the things discussed in this article. I freely wrote my impressions without any editorial scrutiny from the press trip sponsor. 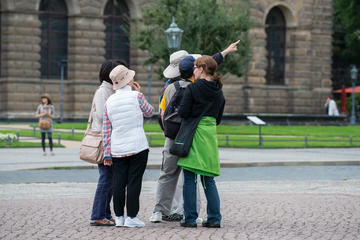 HOW TO LOCATE THE CHURCHES

After taking in these churches that have risen from the heap of World War II destruction, you may want a really hearty Saxony meal with big portions and friendly service. The Pulverturm and der Frauenkirche is the place to go, and is centrally-located in Dresden across the street from the Frauenkirche. The restaurant resides on land where structures have stood off and on since 1565. This restaurant is located in a cellar of low ceilings and gives off a medieval ambience and festive atmosphere. The servers are dressed in period costumes ranging from the 1500s to 1900s, depending on the season or holiday period. You might hear German folk songs being sung at the tables whenever the accordion player stops by.

The Pulverturm stresses Saxon cuisine, and many entrees feature potatoes and pork. Price ranges for main courses are currently around €8 to €32 (a Euro is about US$1.20 as of July 2010). I enjoyed via candlelight their tender and tasty roasted trout fillets as well as their herb spaghetti with large Parmesan cheese shavings, in which the scent and taste of basil and olive oil dominated my taste buds during the latter course. Ask for some of their yummy homemade Schwarzbrot, their whole grain rye bread that’s chased with herbs. This restaurant is open from 11 a.m. until 1 a.m. daily. Prices and menu items quoted subject to change. Contact An der Frauenkirche 12, 01067 Dresden, Germany. Phone: 49 (0) 351-26-26-0-0. Website: www.pulverturm-dresden.de

Photo credits:
Dresden twilight cityscape by: analogicus from Pixabay
All other photos by Roy Barnes.