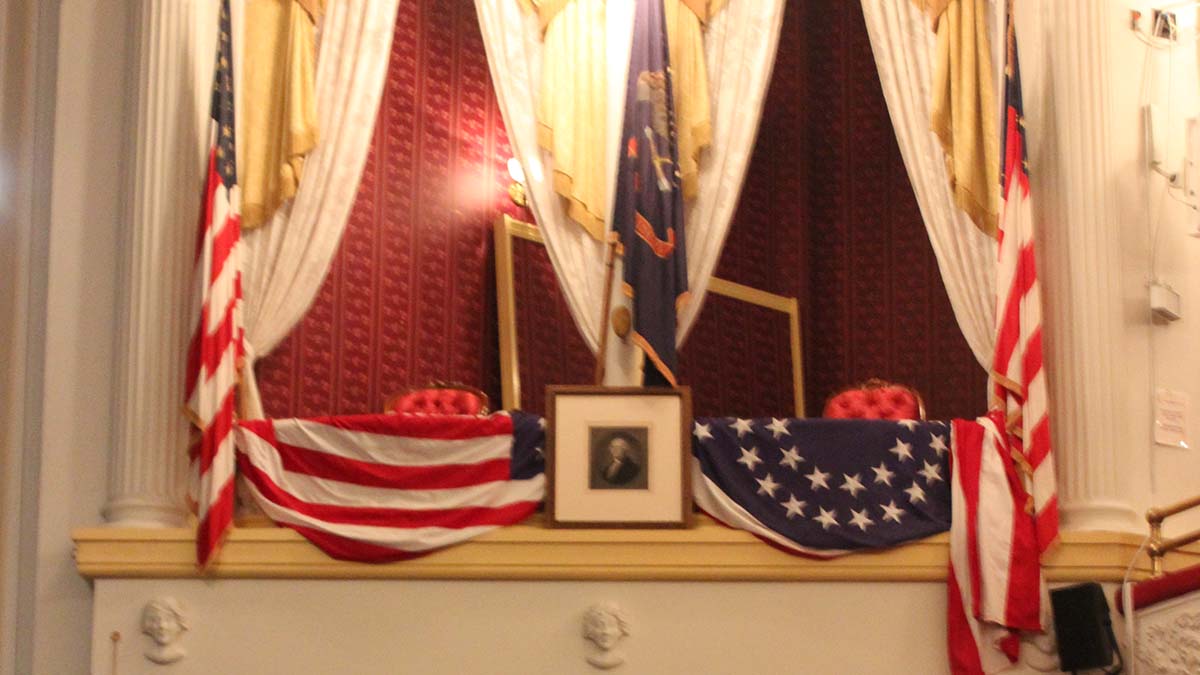 THE PRESIDENT WAS ASSASSINATED!

As my feet stepped down upon the brick street, I thought about that scene some 150 years ago upon this very spot. President Abraham Lincoln had just been shot in Ford’s Theater and was being carried across this road to the Peterson Boarding House. Doctors were not optimistic about the outcome.

During the Civil War, Ford’s Theater was one of Washington’s top entertainment venues. President Lincoln had visited Ford’s Theater on at least ten formal occasions.

Before entering the actual theater area, I stopped at one of the ticket booths. The free ticket was good for self-guided tours at both the Theater and the Peterson House across the street. Over 2,000,000 visitors come every year to be transported back to that evening.

Thanks to Matthew Brady’s photographs taken days after the assassination, the theater interior looks much the same as it did on that historic night. The President’s Box is decorated with two American flag-like buntings surrounding a portrait of President George Washington…just as it was on the night of April 14, 1865.

If you look closely, you can see a crack in the Washington portrait glass where John Wilkes Booth hit it as he jumped over the balcony railing. Two of the chairs in the Presidential Box are originals from that night.

By 10:15 that evening, the comedy was well into its last act. In the Presidential Box, President and Mrs. Lincoln laughed at the show along with two of their friends, Major Henry Rathbone and his fiancée, Clara Harris. Neither they nor the audience of some 1,500, knew that Booth was just outside the door.

Immediately preceding the shooting, Actor Harry Hawk, was delivering the laugh line of, Our American Cousin. He was the only one on the stage.

Don’t know the manners of good society, eh?
Well, I guess I know enough to turn you inside out,
old gal—you sockdologizing old mantrap!

John Wilkes Booth was in full view of the theater audience. As a famous actor himself, he was instantly recognizable. With his derringer holding only one bullet, he shot Lincoln in the head and stabbed Major Rathbone in the arm. As luck would have it, the sentry was taking a break. 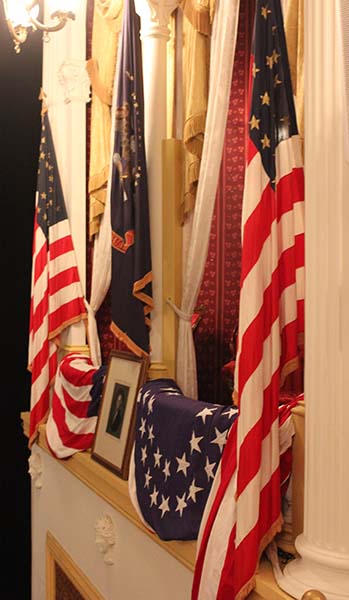 From the ground level, you can climb up the set of stairs to the balcony level, where you are able to stand next to the Lincoln Box. (The interior of the Box is closed to the public to protect it from damage).

Some of the exhibits in the museum were taken from the actual scene. There is Booth’s one-shot derringer. (why would he only carry only one bullet?) The boot taken off his injured foot, is exhibited along with the spurs.

Also on view is Mary Lincoln’s black velvet cloak, and Major Rathbones’s bloodstained gloves, And, most interesting are the contents of Lincoln’s overcoat pocket: two pairs of spectacles, a linen handkerchief, lens cleaner, a pocket knife, a watch fob, and a wallet with a $5 confederate note. Notable also is the iconic stovepipe hat that Lincoln wore the night of the murder.

A series of drawings are positioned along a hallway depicting the day’s events. Here are two examples:

11 A.M. Before his cabinet meeting, Lincoln sends message to Ford’s Theater that he will attend that evening’s performance
12 noon At a stable near Ford’s Theater, Booth arranges to rent a horse

The Abraham Lincoln book tower stands 34 feet tall and 8 feet around in the lobby of the Ford’s Theater. It was constructed to underline Lincoln’s importance by creating a tower of books written about him. The tower measures about eight feet around and 34 feet tall. 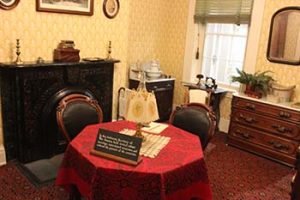 Homes in this 1860s neighborhood were mostly boarding houses for congressmen and other government workers.

The house where President Lincoln died is a must visit after you go to Ford’s Theater. On display are three rooms, with the appropriate period furnishings. (none are the original; Lincoln’s death bed is in the Chicago History Museum) The mortally wounded president was carried to a back bedroom in this house where, due to his height, he was laid diagonally across the bed. Imagine almost a hundred people coming and going through the house to pay their last respects to the dying president. Soldiers stood guard at the front door and were posted on the roof to keep the growing crowds at bay. While doctors cared for the president the Petersen family and some of the boarders spent the night in the basement. At 7:22 am, April 15, 1865, Abraham Lincoln died in the back bedroom this humble house.

The Museum gave us a glimpse at Booth’s pistol, (he had only one bullet) and his boot from the broken leg. Lincoln’s top hat, with the mourning band for his recently deceased son, was also on display. Also, items from his pocket that evening were on display: his handkerchief, his glasses, plus Mary Lincoln’s coat.

Right across the street is the Petersen House where Lincoln died. The bed (a replica, the original is in Illinois) was a little short for Abe’s six feet, four inches. He had to be laid diagonally.

The three rooms in the house today are furnished in 1865 period pieces. None of the furniture is original to the house: the pieces are based on drawings. Visitors use the same ticket that they used to tour Ford’s Theater. The House is open 9:30 am to 5:30 pm daily.

Parking next to Ford’s Theater $12. This is well worth it as street parking is hard to find.

Admission to the Petersen House is free (with ticket, procured at Ford’s Theater box office)

About the author:
Wynne Crombie has a master’s degree in adult education. Her work has appeared in: Travel and Leisure, Dallas Morning News, Country Woman, Senior Living, Catholic Digest, Your Genealogy Today, Air Force Ties, Stars and Stripes, Chicago Parent and she has been a contributor to Travel Thru History for several years.