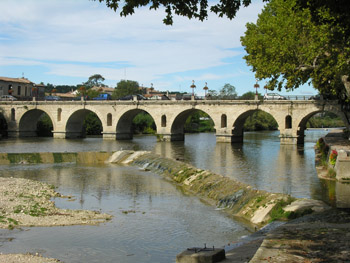 It is small, by today’s standards, but it has something special. A magnet drawing the eyes of the powerful in their time and the tourists of today.

Sommieres had and has a Roman bridge. And of that much came to be and is to see.

The Vidourle River, in southern France, on its journey to the Mediterranean, is less broad than it was between 19 AD and 31 AD when Roman Emperor Tiberius had erected a twenty arch bridge as part of the road, Via Luteva, connecting the ancient cities of Nemausus (Nimes) and Tolosa (Toulouse). Today but seven arches leap across the waters before the town clock gate gives access to the medieval town which grew up due the grace of the crossing. The remaining thirteen arches still exist but now stretch under the streets and buildings of old Sommieres. Restored and maintained over the years the bridge was last seriously overhauled in 1716. The river, on occasion, reminds residents the water gods once ruled here as flood waters occasionally immerse the town; the last serious flood was in 2002. 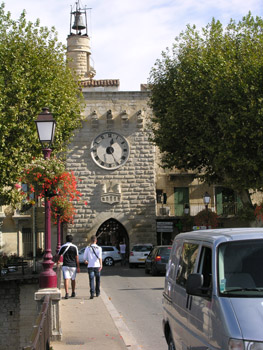 The Vidroule River flows leisurely along its defined banks flanked by nurtured trees and a tended walkway. A pastoral setting so peaceful we were entertained by a solitary otter swimming slowly by, oblivious to the nearness of people and cars. Cafes colonize the walkway with tented outdoor seating offering customers a tree shaded view of the Vidroule and its famous bridge. In its time the bridge was the only crossing of the Vidroule between the Mediterranean and the Cevenne Mountains; hence Sommieres’ ancient importance.

The Gothic Tour de L’Horloge (clock tower), built in the 17th century as one of only two entrances to the old town ( a third was carved out in 1608), faces you as you enter via the ancient “Pont Romain”. The tower gate opens upon a narrow cobble street, Rue Marx Dormay, lined with shops and cafes leading to arcaded Place Jean Jaures. Nearby is the large Place du March where the town market, famed since the 13th century, occurs and where those interested can espy one of the old bridge arches now land locked and giving passage under Rue Marx Dormay. The clock gate once stood alone upon the bridge until the medieval town began expanding behind it in the 10th century. Rising high above bridge and town are the remains of the chateau which controlled river crossing and town access. Business was good running bridge tolls. 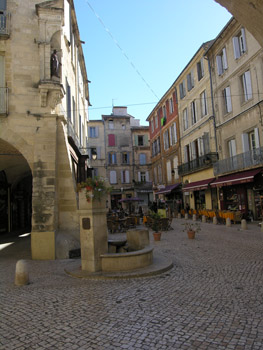 Today the chateau, partially restored and turned to museum remembrances, recalls eras of siege and troubles. Initially constructed between the 10th and 11th centuries at its height it had two towers frowning over river and town of which but one remains. Its first mention in records was in 1041. As its prominence passed it was employed as a prison and eventually lapsed into partial private and public ownership. From its heights town and country spread out in a broad vista.

Four times, in 1248, 1573, 1622 and 1793, Sommieres was seriously besieged during the many religious wars which plagued France. It did not always fall easily to invaders. Initially a protestant dominated town it went back and forth during the prolonged wars which left dark reminders of the doings of man but also a humorous physical legacy worth seeing.

The siege of 1248, during the Albigensiens Crusade, saw France wrest it from the doomed Cathars, who were branded heretics by the Pope and totally wiped out; a grim genocidal business paralleling the worst of Europe’s apocalyptic legacies. The siege of 1573 was so severe it was said to have left only 38 standing buildings in its wake. It ended at the last as a Catholic community.

At Place Saussine, high upon a wall facing where the protestant church used to be is revealed the image of a glaring medieval character sticking out his prominent red tongue. It is said to be a Catholic mocking his protestant foes. The church was destroyed in 1685. 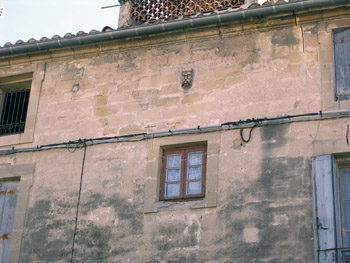 Sommieres, at 4,500 population, is not the prominent town it was those many years ago which makes it all the more inviting as it’s medieval heart continues to dominate and afford much for the wandering feet of visitors. Narrow streets and lanes sprout off in all directions yet maintain the Roman dominance of grid patterns. In some cases arches over streets have evolved into windowed buildings creating little tunnels to explore and, dotted throughout, are small arches spanning between buildings as some form of support. The narrowed confines open to readily framed vistas for telling photos.

At the far end of Rue Taillade sits the old Ursuline Convent built in 1666. Rising above its winding steps is a tunneled exit leading to streets winding beneath the chateau tower.

All the old city gates see their roads converge upon Place Jean Jaures and afford the visitor the shops and cafes wherein to browse and relax at. Sommieres has many compacted offerings to keep the visitor well occupied for a day. And here, free from the press of cars, the stroller can amble about exploring nooks and crannies like some Alice in Wonderland walkabout.

Though Sommieres is small, its days of prominence long gone, it’s very size and compactness make it an ideal setting to venture back in time while enjoying the amenities of today.

♦ Getting There – Sommieres is well service by bus, train and road. Its old town is pedestrian only.
♦ Information – The tourist information centre is located along the Vidroule River walkway and can provide a walking map of the old town as well as an outline of Sommieres other offerings.