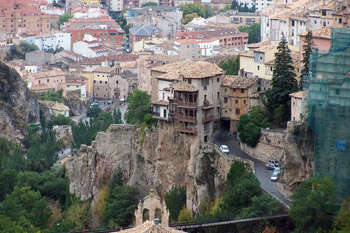 My first thought upon observing the houses of the Spanish city of Cuenca, was that I wouldn’t want to be a sleep walker if I lived in one of them. This unique city, tucked away in the mountains of Castilla-La Mancha, is famous for its casa colgadas, or hanging houses, perched on top of cliffs surrounding a deep gorge carved out by two rivers. Due to limited space, the former inhabitants of the old city built their houses close to the edge, on a rocky mountaintop. Over the centuries, the relentless wind eroded the lime stone cliffs leaving some houses clinging precariously to the edge. A few balconies actually jut out over the ravine, which would make sleepwalking indeed dangerous.

Originally built in the 14th century, the remaining hanging houses are tall, narrow, rectangular stone structures, with two to three floors. They have been renovated and refurbished over the years and recently been reinforced for stability. No one actually lives in them anymore but some are home to “The Museum of Spanish Abstract Art”; a collection of art banned during the reign of Franco. 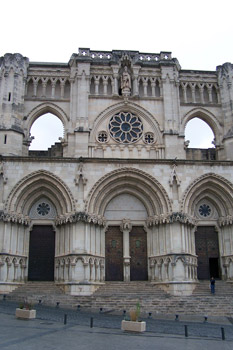 The hanging houses are the draw to this remote city but the old part of town itself is worth exploring. We take a short walk downhill from a lookout point to the Plaza Mayor where the Cuenca Cathedral is located. Dating from 1177, the building is impressive with its three arches. The Gothic Anglo-Norman façade is the only one of its kind in Spain with construction on the cathedral continuing for 300 years and never quite completed. I enjoy wandering the medieval cobblestone streets that wind past old stone houses, adorned with colorful plants spilling over the balconies and climbing up stairways.

Our trek brings us to Puente de San Pablo, a pedestrian bridge that crosses the ravine, providing remarkable views and photo opportunities of the city and the perilous hanging houses. I have an eerie feeling that one of them might topple down into the chasm before my very eyes. The devilish wind whips around, daring me to cross the bridge. I suggest not looking down if you are at all afraid of heights.

Once on the other side of the bridge, we find a good place to get something to eat at the Cuenca Parador, a government run hotel that was a former Dominican Monastery. I relax on the high backed overstuffed couches and sample the region’s traditional recipes. The food is tasty and not overly expensive. The original convent dates from the 16th century, with period furniture and works of art adorning the rooms. The ceilings depict religious scenes. The quaint confessionals are now telephone booths. The ambiance alone is definitely worth the visit. 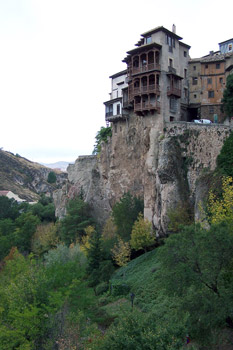 We spend the night at Hotel Cueva del Fraile or The Cave of Friars, an enchanting place seven kilometers up the road. This 16th century building hidden in the rugged mountains was once a monastery (for the devout), later a workhouse (for the poor) and now a luxury place of refuge (for the weary traveler). I get lost finding my room as I wander the myriad of stairs and hallways, which only adds to the charm. The structure has stayed true to its original construction and surrounds a peaceful courtyard. The rooms, with high ceilings, thick stone walls and wooden beams, have no doubt been made more comfortable since the days of the friars. Antiques depicting former times are found throughout the building. The hotel restaurant features delicious, authentic Castilian cuisine for dinner and breakfast. It’s impossible for me to resist the thick, creamy hot chocolate and chocolate filled croissants on offer. Staying at Cueva del Fraile is a memorable experience for someone with an overactive imagination. Rumour has it that there is even a hotel spook!

The return trip back takes us through Cuenca, now a UNESCO World Heritage Site, where I once again marvel at the houses that tempt fate by hanging bravely on the precipices with a sheer drop to an unforgiving abyss.

6 Nights guided tour in Andalusia, Valencia and Barcelona from Madrid

♦ Cuenca is 140 kilometers south east of Madrid, about one and a half hours by car, on the N400 turning northwest on the A3 at Tarancón.
♦ A number of buses leave Madrid daily for Cuenca, €9.80 for the two hour ride.
♦ For more information on Cueva del Fraile visit: www.hotelcuevadelfraile.com/en 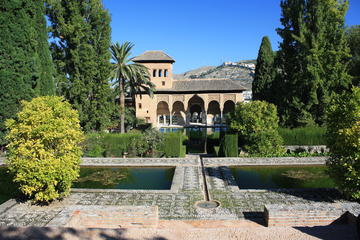 About the author:
Darlene Foster is the author of the Amanda travel/adventure books for children, various short stories and travel articles. Brought up on a ranch near Medicine Hat, Alberta, she dreamed of traveling the world, meeting interesting people and writing stories. She has made it her mission to discover the uniqueness of places and write about them. She lives in Tsawwassen, BC with her husband and black cat, Monkey. Visit her website at: www.darlenefoster.ca