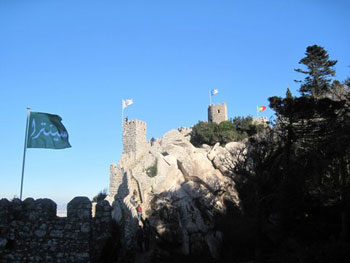 From the train I can see one seemingly small turret on top of a hill. And then another. Then I see that they are joined by a wall. The effect is that of a saddle. They are so high up that it makes me wonder how I will ever reach the castle. The train comes to a halt at Sintra, the end of the line. I look up: the turrets don’t look any closer. Maybe taking the bus is a good option. 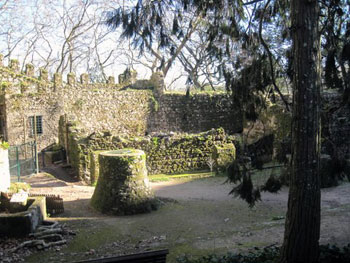 Once I pay for my ticket at the ticket office housed in a trailer, I follow the signs and go through the turnstile. I walk past some workers manning a zip line that allows them to bring up wood planks and other constructions materials from down below for restoration work at the castle. I follow the signs along the path.

I walk past the chapel and a memorial, the medieval tombs, the big stone silos and the water cisterns on my way towards the battlements. I’m amused by the Traitors’ Gate, an impossibly small entrance. I wonder how it got its name. 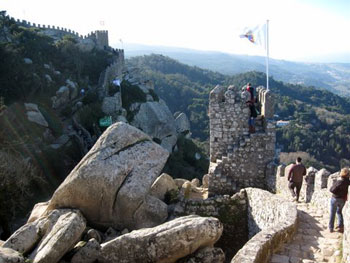 nce I reach the battlements, I can see undulating land disappearing in the distance beyond the stone walls. The Portuguese flag and the Moorish banner flutter in the cool winter breeze. It felt damp and cold in the shade but warm –too warm to wear a jacket- out in the sun. The turrets and keep glowed in the afternoon light, in sharp contrast with the darkness created by the dense vegetation below.

The battlements are narrow and low and the stone steps, worn. There are no railings either. It is quite an adventure to go from one turret to another. If somebody is coming in the opposite direction, one of you will have to flatten against the wall to give way to the other. 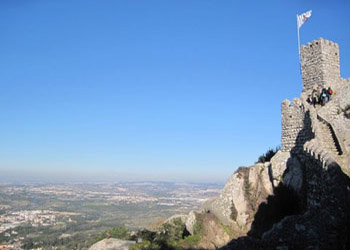 The Moorish invaders began to build what is now known as the Moorish Castle (Castelo dos Mouros) in the 8th century. Its vantage point at the top of the hill is a perfect defensive position. It’s easy to imagine the sentries marching along the walls, keeping an eye out for the Christian armies. And it is equally easy to picture the hosts of King Afonso VI swarming up the hills in 1093 in a successful attempt to take Sintra from the Moors. The fortress changed hands between Moors and Christians a few times more until Lisbon was conquered by Dom Afonso Henriques (the first king of Portugal) in 1147, when the Moors surrendered the castle to him.

The Moors were able to withstand siege with fresh water from the springs, which they channeled into the cisterns, with the grain that they stored in the silos and because the castle was impregnable. However, it was impregnable on only three sides. Its Achilles heel is the sloping woods. It’s not difficult to see how Dom Afonso was able to override their defenses and storm the fortress. The chapel of S. Pedro de Canaferrim was added to the castle after the conquest as the parish seat.

The castle, as so much in Portugal, is an intriguing mix of Christian and Moor. 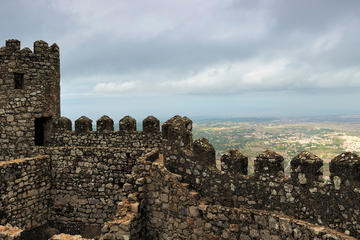 Getting there:
♦ Sintra is located about 20 miles northwest of Lisbon.
♦ Rossio Station (Linha de Sintra) 39 minute ride. Trains depart every 15 minutes, and at the time of writing the fare was €2.05 each way.
♦ At Sintra Station take the number 434 bus -run by Scotturb- to Castelo dos Mouros. It runs in a loop called Circuito da Pena. It goes up and down the hill stopping at each attraction. A return ticket was €5.00 at the time of writing. The castle can be reached on foot from Sintra but the lack of sidewalks and too many bends make it somewhat treacherous. The bus is a safer and faster option.

About the author:
Ana Astri-O’Reilly is originally from Argentina and now lives in Texas. She worked as a translator and foreign language instructor in her native Buenos Aires. Now she is a contributing editor at PocketCultures.com and writes about travel on the blog Ana Travels (anatravels.com). She speaks fluent Spanish, English and some Portuguese.
Facebook: www.facebook.com/anatravels
Twitter: twitter.com/anaoreilly
Travel blog (English) anatravels.org
Food blog (English) foodtrailsandtales.wordpress.com
Blog personal (castellano) apuntesideasimagenes.wordpress.com/

Photo credits:
All photos are by Ana Astri-O’Reilly.