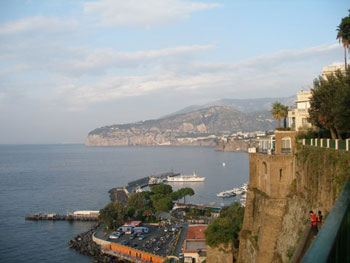 “Never again!” I said after my day trip to Naples in 2008. And true to my word I returned in 2009 and did it all over again. But this time my visit was a real pleasure. Like me, your first impression of Naples is colored by the imposing maze of streets adjoining the train station. The success of your visit to old Napoli largely depends upon how quickly you can escape from this area of the city without becoming lost. And the secret to a successful escape is to ride the bus from the Piazza Garibaldi in front of the train station to your first tourist destination.

Begin your day trip by riding bus R2 to the Palazzo Reale. Upon arrival, you are sized-up by statues of eight past Neapolitan Kings set into the external façade including Roger the Norman, Charles V and Victor Emmanuel II.

Once inside, climb the stately white marble Grand Staircase to the baroque style royal apartments. Winged nymphs guard the main entrance. Beyond are rooms filled with 17th to 19th century paintings, frescoed ceilings and furnishings. Stroll down the elegant hallway reminiscent of the Hall of Mirrors at Versailles. Visit the throne room which features a well-used royal throne. The red velvet seat and back are badly torn. The Palatine Chapel houses an intricate 210 figure nativity scene on the left side of the room and a scale model of the Palazzo Reale on the right.

The San Carlo Theater, originally built for private performances, is on the ground level. This opera house is second only to La Scala in Milan. An operatic exhibition of props and costumes is spread over 30 rooms. 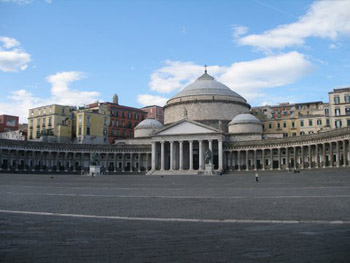 Leave the theatre and cross the Piazza del Plebicito to the Church of San Francesco di Paola. Its design is based on that of the Pantheon in Rome. At 53 meters in height, the dome is 10 meters higher than its Roman counterpart. While the San Francesco oculus is covered, the Pantheon’s is not. The white marble church interior features thirty two Corinthian columns circling the perimeter and an altar inlaid with lapis lazuli and precious stones.

Fifteen minutes from the Piazza del Plebicito, you find the Castel Dell’Ovo strategically situated atop a jetty. In its time, this 12th century Norman castle served as a Benedictine Monastery, a ducal residence, a state prison and now a showcase for art exhibits. Visitors to the terrace should note that the art works are protected by 6 cannons aimed at the city. This same terrace features a panoramic view of the harbor and Mount Vesuvius in the distance. In the dungeons, you find columns that were part of an old Roman villa on this site. This villa once served as a prison for the last Western Roman emperor, Romulus Augustulus, after he was deposed by Odoacer in 476 AD. 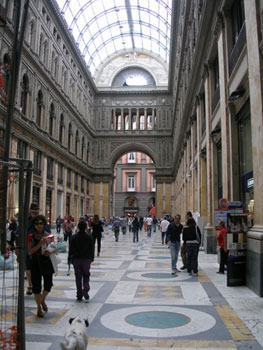 Returning to the Piazza del Plebicito, cross the Via San Carlo to the 19th century Galleria Umberto I. The refined galleria is an octagonal structure, enclosed under a glass and iron dome. Stylish shops and businesses fill this indoor mall.

Exit the Galleria Umberto and board the Funiculare Centrale for a ride to the top of hill. Upon your arrival, follow the signs to the Villa Floridiana to escape the hectic pace of the city. While the neoclassical villa houses the National Museum of Ceramics, the real attraction is the serene garden and the sea-and-sky view of the Bay of Naples. You may wish to enjoy the cool breeze and a picnic lunch from a shaded bench overlooking the city. A number of turtles in a nearby fountain are your dining companions. 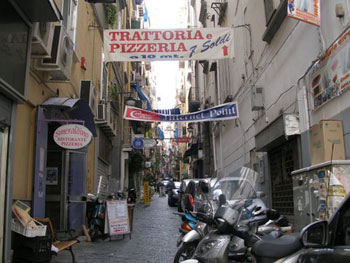 After lunch, ride the Funicalare Centrale back down to the bottom and follow Via Toledo through the heart of old Napoli – the Spaccanapoli district. Naples earns its reputation from these chaotic, unkept streets. Common sights include laundry hanging from balconies above the colorful shops and street vendors hawking goods with their operatic voices and theatrical gestures. Enjoy some window shopping as you walk between tightly parked cars and dodge oncoming vespas on your way to the National Museum of Archeology. 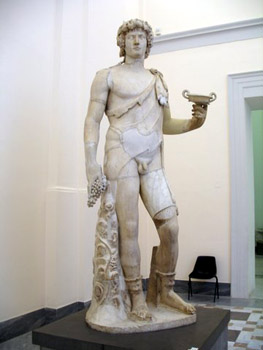 After passing your afternoon at the museum, continue your tour at the 14th century Gothic Duomo. Displayed within the Chapel of San Gennaro, a silver reliquary bust of the saint holds his skull and two vials of his congealed blood. Tradition holds that if this blood fails to liquefy on each of three festival days during the year (the first Saturday in May, September 19 and December 16), disaster will strike the city. Remember that Mount Vesuvius is a short distance from Naples.

On the opposite side of the Duomo, the 4th century Basilica Santa Restituta was the earliest Christian basilica in Naples. It stood alone until 1315 when it was incorporated into the Duomo. The columns inside were recycled from the Temple of Apollo which originally stood on this site. 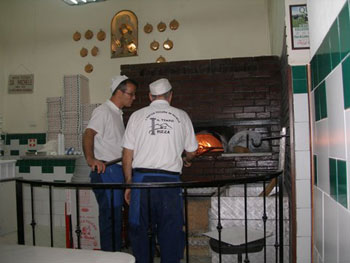 Dinner time is likely upon you as you walk back to the train station. And this is your opportunity to enjoy original Neapolitan pizza. At the train station, board the R2 bus and experience a genuine Neapolitan traffic jam as you ride to the first stop on the route. Exit the bus and walk through the maze to L’Antica Pizzeria da Michele.

L’Antica Pizzeria da Michele, in business since 1870, is renown throughout Naples for its traditional wood oven-baked Margherita and Marinara pizzas. Add these two items to beer and Coca Cola and you have the entire restaurant menu. Amazingly, wine is not available for some strange reason. A rustic two room interior adds to the ambiance. Savor your meal as people line up outside for a table.

At this point, if you are like me, a good meal and a memorable day trip have dispelled any stress and reservations that you might have had about Naples. The real Napoli is charming, vibrant and colorful. And the secret behind this revelation is a bus ride from the train station. 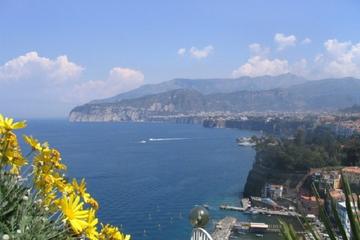 ♦ Find the tourist information booth at the train station and ask for a map of the area.
♦ Purchase a day pass for the bus. This also allows you to use the Metro and the funicular.
♦ Ride the R2 bus from the central train station to the Palazzo Reale.
♦ Admission to the Palazzo Reale was 8 Euros at the time of my visit.
♦ Photography is not permitted inside the Church of San Francesco di Paola.
♦ Admission to the Castel Dell’Ovo is free.
♦ The Funiculare Centrale (funicular) leaves from Via Toledo near the Galleria Umberto.
♦ Entry into the park at the Villa Floridiana is free.
♦ Hold on tightly to your belongings as you walk through the Spaccanapoli neighbourhood as motorcycle riders have been known to suddenly grab items and speed away.
♦ The National Museum of Archeology is located on the Piazza Cavour on Via Pessina. Admission was 10 Euros at the time of my visit.
♦ The Cathedral of San Gennaro is found on Via Duomo. The cathedral is usually open in the late afternoon after 4:30 p.m. Admission is free.
♦ L’Antica Pizzeria da Michele is located at Via Cesare Sesate, 1-3-5-7. Ask staff at the tourist information office in the train station how to find this pizzeria.

About the author:
Troy Herrick, a freelance travel writer, has traveled extensively in North America, the Caribbean, Europe and parts of South America. His articles have appeared in Live Life Travel, International Living, Offbeat Travel and Travel Thru History Magazines. He also penned the travel planning e-book entitled ”Turn Your Dream Vacation into Reality: A Game Plan for Seeing the World the Way You Want to See It” – www.thebudgettravelstore.com/page/76972202 based on his own travel experiences over the years. Plan your vacation at his website www.plan-a-dream-trip.com